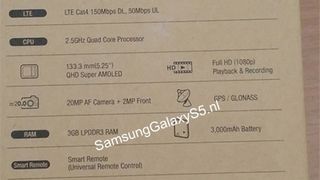 Is this really the back of the S5's box?

The Samsung Galaxy S5 has a level of hype around it usually reserved for Apple products and a side effect of that is that there are enough rumors and leaks surrounding it to bury a small country.

The latest of these could be one of the most enlightening yet though, as there's now an image of what appears to be the phone's retail packaging.

That might not sound overly exciting, but it's the back of the box - AKA the bit with all the specs listed. The image, which was sent to SamsungGalaxyS5.nl by an anonymous tipster, claims the phone has a 2.5GHz quad-core processor, 3GB of RAM, a 5.25-inch QHD (2560 x 1440) Super AMOLED display, 20MP camera, 1080p video playback and recording and a 3000mAh battery.

The screen size and resolution match previous rumors and we've also heard previously that the Galaxy S5 might have a 2.5GHz quad-core processor and 3GB of RAM, so no real surprise there either.

What's more surprising is the 20MP camera, as earlier rumors pointed to a 16MP lens. While it can apparently only shoot 1080p video, which is slightly surprising given that the Samsung Galaxy Note 3 can shoot 4K video.

We've heard several possibly battery sizes in the past but the general consensus seems to be that it would be bigger than the one in the Samsung Galaxy S4, which this is, as the S4 has a 2600mAh juice pack.

Of course there's no guarantee that these specs are the real deal. The image certainly looks like a Galaxy box, but it could just be a Photoshop of a Galaxy S4 one.