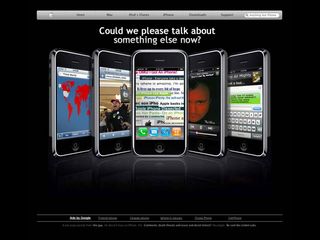 If you thought the iPhone got a lot of attention, just wait until thousands of them stop working suddenly.

Less than a week after we speculated that anyone unlocking their iPhone might run the risk of ending up with a very expensive, but useless, hunk of plastic next time it receives an official software revision, Apple has confirmed that its regular updates may very well 'brick' the handset irretrievably.

In a brief statement issued on Monday, the company said, "Apple has discovered that many of the unauthorized iPhone unlocking programs available on the Internet cause irreparable damage to the iPhone's software, which will likely result in the modified iPhone becoming permanently inoperable when a future Apple-supplied iPhone software update is installed."

In other words, if you decide to break the SIM lock to use your pride and joy on any network other than Apple's official partner and then download, for example, the software update due this week that will allow the iPhone to use the Wi-Fi version of the iTunes store, the entire device may simply lock up for good.

As if that weren't enough, it gets worse with bad news in store for users content to stick with AT&T in the US (and soon O2 in the UK) but who want to install games and the like on their phones:

"Users who make unauthorized modifications to the software on their iPhone violate their iPhone software license agreement and void their warranty. The permanent inability to use an iPhone due to installing unlocking software is not covered under the iPhone's warranty."

Apple not out for blood

Lest anyone think Apple has something against its more free-spirited customers, a company executive told Reuters, "We are not doing anything proactively to disable iPhones that have been hacked or unlocked."

Ah - that's all right then, but what about the thousands of iPhone fans working to add functionality to the device through hacks and tweaks? Surely making it better and more desirable can only benefit Apple and its partner phone networks in the long run.