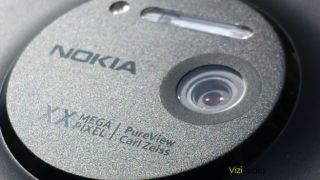 Is an official 'EOS' announcement imminent?

Another day, another purported glimpse at the rumoured, camera-focused Nokia EOS smartphone. However, this time it has apparently gone on show in moving pictures.

Yes, the thought-to-be-forthcoming Windows Phone 8 device with the PureView sensor seems to be gracing YouTube in a somewhat blurry 50-second clip displaying the large camera module in all its glory.

The clip, shared by ViziLeaks, actually shows the camera in action. You know, taking pictures. It demonstrates the the shutter opening and closing as well as the image stabilisation tech on board.

The casing is obviously a pre-release version as it doesn't state the exact megapixel count, instead displaying a 'XX'. The only previous PureView model rocked a 41-megapixel sensor. Of course, there's no way to prove this is actually EOS' camera, so take this all with a grain of salt.

The site also shared some photos, including the first we've seen of the front of the device, which as expected, bears a striking resemblance to Nokia's recent Lumia Windows Phone devices.

Earlier this week, we saw leaked pictures of the device's casing thanks to Chinese site WPDang, showing the protruding lens that will allow Nokia to pack in all of that fancy camera tech.

Speculation surrounding the device has suggested that the Nokia EOS smartphone device will pack a quad-core processor, 720p display, 32GB of storage for all of those hi-res photos.

Reports have also claimed that the device will take two versions of every photo. One at a whopping 35MB and one at 5MB which makes will make them easier to share on social networks.