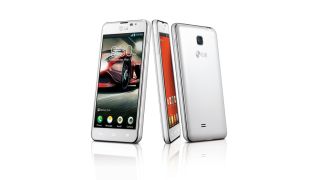 You'd never guess this handset was under $300

LG is hoping the shake-up the market with its mid-range, 4G-enabled Optimus F5, promising more features for a lower cost.

While 4G is found most commonly in high-end phones, LG is offering the functionality on the F5 at a price-point of less than $300.

Available for purchase online in Australia today, the phone is exclusive to Optus and Virgin Mobile. Optus has it available on both prepaid and postpaid plans, making the Optimus F5 its first 4G phone available on a prepaid plan for the telco.

Bang for your buck

LG is aiming to give customers "more bang for their buck", according to Brad Reed, LG's senior marketing manager.

"About 45 per cent of the handsets that are sold out from retail at the moment are 4G handsets, but the growth has flattened out. What you are seeing is pretty much the postpaid market is all 4G, anything below postpaid is 3G," Reed said.

"With that in mind, we are introducing a range of handsets, the Optimus F5 being the first one, which introduces very aggressively priced handsets with great features into the 4G market."

With Android Jelly Bean on the phone, Reed touted the QuickMemo function, which allows users to quickly bring up the app and write or draw directly on the screen, and the QSlide feature, giving the user the ability to make some apps transparent while still running so that you can perform other tasks.

These features are expected to be included across the entire range of phones to be released by LG this year.