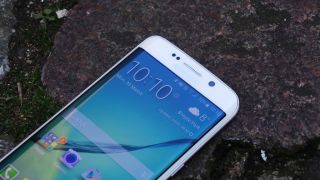 There seems to be a lot of evidence that Samsung is planning a super-sized version of the S6 Edge - not least the pictures that leaked a couple of weeks ago - and now we have a few more hints to go on.

First up are reports from Galaxy Club in the Netherlands that Samsung has trademarked the S6 Note name in South Korea, suggesting that the upcoming Plus device will in fact join the Note family.

Based on what we know so far, there doesn't seem to be any other device that could be the S6 Note. The device would probably feature an Edge-style curved screen to distinguish it from the upcoming Galaxy Note 5.

We also have some new updates on the specs of the S6 Note (or S6 Plus or some kind of variation on that theme). SamMobile says the phablet will have a huge 5.7-inch screen, bigger than previously thought.

It will indeed have the distinctive curved edges of the Galaxy S6 Edge and it's going to come with Android 5.1.1 out of the box, according to the sources SamMobile spoke to.

That's all the new information we have right now, but with a Q3 2015 launch date rumoured (July, August or September) it shouldn't be too long before we see the handset confirmed.

Via Softpedia and PocketNow