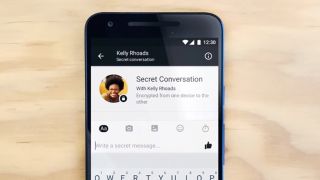 Your Facebook chats are about to get a lot more secretive, if you want them to be: the giant social network has announced it's testing end-to-end encryption and message expiration settings for Messenger on mobile.

Encrypted messages, like those on WhatsApp, can't be read by anyone but the sender and the recipient - not even if a rogue Facebook employee wanted to snoop on your chats or the government fancied tuning in. Even if the police asked Facebook to turn over encrypted chat logs they'd be pretty much useless.

The majority of users love encryption, because it means their conversations are almost completely unhackable; law enforcement agencies are less keen, because it stops them from monitoring suspected criminals as closely as they might like.

The new features are rolling out on a "limited test basis" and the moment and will be "more widely available this summer", Facebook says. They're also going to be opt-in (so not on by default, and only for mobile devices - apparently it's too difficult to implement the same encryption on the web.

"We've heard from you that there are times when you want additional safeguards - perhaps when discussing private information like an illness or a health issue with trusted friends and family, or sending financial information to an accountant," explains Facebook.

Meanwhile for those who are bored of human-to-human interaction, Messenger's bot army continues to grow: Yahoo is bringing its popular finance, weather and news services to the platform, so you can get updates right inside the chat app.

Here's how to download and setup the latest version of Android: