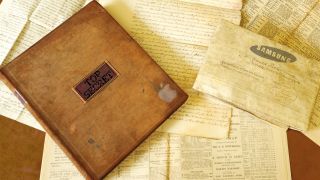 Weird that they use parchment, really

Apple and Samsung are scrapping in the courts again, and you know what that means: top-secret stuff gets thrown about with gay abandon, providing us with an insight into the tech giants' most jealously guarded plans, predictions and peeves.

So what can we discover from the latest battle in Apple's Android war?

You can't fault Steve Jobs' consistency: when he said he wanted to wage war against Google, he stuck to the message and made plans to act. The "thermonuclear war" on Android he told his biographer, Walter Isaacson, about had a different name in a 2011 internal email, though. In an email to top staff Jobs spoke of a "Holy War with Google", which was the "primary reason for this Top 100 meeting".

2. Samsung has been planning to dump Android for ages

Samsung has done well out of Android, but it sees the lack of control and rivals' adoption as weaknesses - so while Apple is number one on its enemies list, HTC, Google and Samsung itself are in the top four too. Samsung's documents say it has been struggling to stay on top of Android updates and would rather use its own, proprietary, OS.

3. Apple cares more about the competition than it lets on

We're supposed to think that Apple doesn't care about market share, but of course it does; it just doesn't like to admit it. An internal slideshow about Apple's 2014 phone strategy, which was presented during the cross-examination of Apple marketing VP Phil Schiller, said that "consumers want what we don't have" and emphasised the growth in cheaper and larger phones.

When questioned, Schiller says he didn't agree with it and it didn't represent Apple's policy - although in what's surely a coincidence Apple is widely expected to launch a bigger iPhone, the iPhone 6, in 2014.

4. Apple was jealous of Samsung's marketing

So much for Apple not caring what the media says: when the Wall Street Journal said Apple had lost its cool to Samsung, Phil Schiller emailed Apple's ad agency to say: "We have a lot of work to do to turn this around".

The agency's response "shocked" Schiller, who replied with an angry email and went on to praise Samsung's Superbowl spot. "I can't help but think 'these guys are feeling it'", he wrote. "That's sad, because we have much better products."

According to a 2011 Samsung strategy plan - a plan with the heading BEAT APPLE on page two, Samsung's "#1 priority" is "beating Apple." "(everything must be context of beating Apple)," the document adds, somewhat unnecessarily.

6. Android didn't want touchscreens until the iPhone came along

The excitingly named Android Project Software Functional Requirements Document version 0.91 - July 6 2006 confirms what most of us had already guessed: the iPhone launch caused major facepalms at Google, which was planning to concentrate exclusively on phones with horrible little buttons.

"Touchscreens will not be supported," the document says. One Steve Jobs "boom!" later and Android, like the rest of the smartphone sector, suddenly got all touchy.

7. The Galaxy Tab was a massive flop

Many of us were cynical about Samsung's 2011 claim that it had sold 2 million Galaxy Tabs by the end of 2010, suspecting that by "sold" it meant sold to retailers, not to customers. When pressed Samsung wouldn't give a straight answer, but evidence obtained by AppleInsider shows that the real figure was much, much lower: just 1m total sales up to June 2011. The Galaxy Tab didn't even outsell the Nook.

In the same email that talked about a holy war with Google, Steve Jobs bullet pointed the plans for the next Apple TV: "Where do we go from here?" he wrote. "Apps, browser, magic wand?" We're assuming the latter item is a potential product rather than just sarcasm.

If Apple wants to cause trouble for Samsung, it should leak news that the iPhone 7 will contain a unicorn, run on dilithium crystals and include a metal detector: in Samsung's strategy plan for 2012 it described the "extremely real and urgent" threat of the then-unannounced iPhone 5. The specs, Samsung predicted, would include "LTE, social networking, cloud integration, CE [Consumer Electronics] integration, improved Siri". Someone's been reading the rumour round-ups.

10. Copying was a two-way street

Multiple documents show that Samsung analysed Apple's software forensically to improve its own offerings. An incredibly detailed 2010 analysis shows exactly where Apple got it right and Samsung got it wrong (short version: pretty much everywhere), while an earlier User Experience (UX) analysis uses the iPhone as an example of what Samsung should have been doing but wasn't. On the other side, Steve Jobs' Holy War email noted that Apple "needed to catch up to Android where we are behind", citing "notifications, tethering, speech…" as areas for improvement.