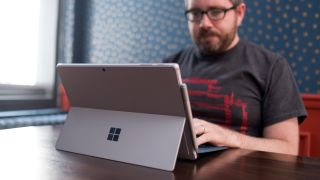 Microsoft has released another new preview build for Windows 10 working on further refinements for the big update due later this year – Redstone 5 – as opposed to the imminent Spring Creators Update, which there’s still no sign of (more on that later).

Build 17643 was pushed out to those in the ‘skip ahead’ ring and contains a nifty improvement for Data Sense, plus more work on Sets.

Under Data Usage settings, Microsoft has introduced a new overview of how much data you’ve used while roaming, so those with a notebook that has a SIM and cellular connectivity can better keep tabs on whether they might be in danger of overrunning in terms of data usage.

Moving on to Sets, this is Microsoft’s big new idea of introducing web browser-like tabs to the wider Windows 10 interface.

The last preview build made it possible to drag tabs around within a window, or to a different window, and in this build, Microsoft has brought sets to Office 365, meaning you’re free to use tabs to keep things better organized within the productivity suite with apps like Word, Excel and PowerPoint.

Microsoft also noted that Sets is now enabled for the majority of desktop (Win32) apps which use a non-customized title bar (software which customizes the title bar won’t have Sets functionality).

Furthermore, an issue has been fixed with Edge tabs, so you can now drag these around within a Set, or drop them into another Sets window, without running the risk of a crash (although you can’t yet drag between a Sets window and a standalone Microsoft Edge window).

However, a new issue has been introduced – such is a tester’s life – whereby some folks might see Sets vanish completely with this build. Microsoft says that the functionality will return on the next reboot of your machine, or failing that, within the next couple of days.

Also on the Microsoft Edge front, a further enhancement here is that Microsoft WebDriver has been implemented as a ‘Feature on Demand’. WebDriver is for developers testing their website in Edge, and the change will make it easier for them to ensure they have the right version of WebDriver for their particular device.

Windows 10’s Magnifier has also been improved in this build with an option that lets you keep the mouse centered on the screen when in Full-Screen mode, along with the addition of more fine-control over zoom level.

There are various other tweaks, and you can check out the full exhaustive list in Microsoft’s blog post.

As we mentioned at the outset, there’s still no sign of the Spring Creators Update (Redstone 4). It was expected to be launched back on Tuesday, but inside sources say that a major bug put paid to that plan.

Microsoft is busy fixing that problem, but there’s still no indication of when we might see the rollout begin. Rumor has it that we could be waiting until the last week in April.