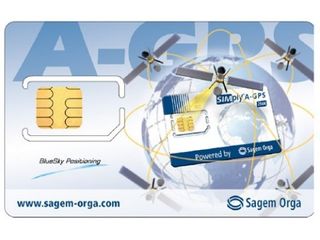 GPS in your SIM

If you're one of the poor and unfortunate tech-deniers of the world, then chances are you've not got GPS in your mobile phone. Or a mobile phone.

But help is at hand from Sagem Orga (as long as you actually do use a mobile) as it has developed a SIM card with a-GPS baked right in, negating the need for all the fancy pants handsets.

Originally developed to help the emergency services, allowing them to find out where the caller is phoning from, Sagem Orga has been approached by a number of mobile operators to upgrade users.

It's not yet known whether it will cost more or less than having the hardware already on the phone, nor do we know whether the signal will be stronger / weaker.

But it is a great idea for getting location-based services to a wider range of people, though how much handsets will need to be changed to accommodate the new service.

The deal is in partnership with BlueSky Positioning, and Global Account Marketing Manager at Sagem Orga François Blanchard said: "The SIM is entering a new era where it can now be considered as a real service platform and a valuable device; the A-GPS enabled SIM card will reshape the way SIM card are perceived by MNOs and end-users."

So that's told you then.