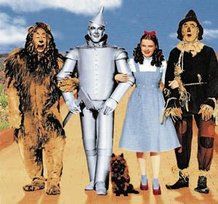 Is that your phone or a yellow brick?

Like a glamorous starlet heading a across the pond to make it big in among the glittering lights of Tinsel Town, Nokia has decided to open a laboratory in Hollywood.

But will it be staffed with the finest Scandinavian engineers known to man? Of course not, it will be "recruiting from and collaborating with the Hollywood entertainment, media and art communities".

Basically, this is an attempt from the Finns to try and convert the 'Facebook culture' onto the mobile platform, with the company claiming to have "strong emphasis on entertainment and associated experiences, research topics will include mixed reality, content creation and user interface experiences".

So Nokia has looked at the problem ('People aren't engaging with our entertainment content') and decided to go to the entertainment capital and find out how to create the star quality on mobile phones.

"Opening our latest laboratory in Hollywood is a key milestone for Nokia. Engaging more actively with the entertainment and media community and establishing a research force there is a significant step for Nokia as we continue to build our position as a leader in the converging worlds of Internet and mobility," said project leader Henry Tirri.

Is the Internet any different from the internet? We hope so, because it means Nokia is going to America to re-invent the web! WOW!