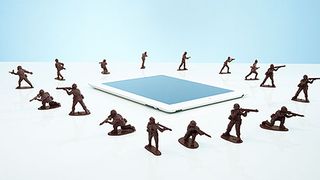 It's better to be safe than sorry.

Despite Apple's best efforts with the walled garden approach to prevent malicious software from installing, there's still a massive vulnerability that can cost you valuable data. It's you.

OK, we'll, not you specifically, but iPad users in general — of which I assume you're one, or why are you reading this? iPad users create security problems for themselves by not implementing the simple security features that Apple has built into iOS.

Your iPad is pretty safe when it's in your hands, but if someone gets at it when you turn your back — or if, heaven forbid, they steal it — all bets are off.

Imagine for a moment what someone stealing your iPad might get at, other than swiping your shiny toy. Confidential emails? Passwords? You log out of Facebook every time you quit the app, right? No? Oh, that could be embarrassing.

However, there are some very easy things you can do to protect your data and yourself — and maybe even your iPad — built in. Incidentally, everything discussed here also works with iPhones, although you're more likely to keep your iPhone on your person rather than in a bag, so it's a bit safer.

Use a better passcode

For whatever reason, the iPad doesn't make you use a passcode to unlock your iPad by default. The slight inconvenience seems tiny compared to the potential consequences of a compromised tablet, so fix that straight away.

Open the Settings app and tap on 'General' in the left-hand column. Find 'Passcode Lock' and tap on that.

The resulting pane has a number of options. First, tap on 'Turn Passcode On'. After all, that's what we came to do.

You'll then be presented with a keypad into which you can enter any four-digit code that comes to mind. A good four-digit code is easy for you to remember, but difficult for others to guess, so don't use your birthday or anything like that.

When you've tapped it in, you'll be asked to enter it again and then you're done. Sort of.

A four-digit passcode is all well and good, but an actual password is so much better. It's easier to remember and harder to guess, particularly if you use combinations of upper- and lower-case letters, and throw in the odd number instead of a v0W3l. You see what I did there?

Back in that 'Passcode Lock' pane in the Settings app, you'll see a slider that says 'Simple Passcode' is 'On'. That's the default.

Tap the slider to turn the 'Simple Passcode' to 'Off'. You'll be presented with that keypad again, on which you should enter the four-digit code you created before.

Once you've entered it, you'll be presented with a full keyboard on which to enter your new alphanumeric password. Enter it again and you're done.

If you're not confident about your ability to create a strong, memorable password, there are numerous free or cheap utilities on the App Store to help.

I like Wolfram Password Generator, from the same folks who develop Wolfram Alpha. It costs 99c and can generate all kinds of passwords either randomly or according to rules you set, and it can test the strength of passwords you make up yourself.

Incidentally, right above the 'Simple Passcode' slider, there's the option to set an interval before a passcode is required.

It's basically like asking how long after the horse has bolted you'd like to shut the gate. Unless you can think of a good reason to set it to anything other than 'Immediately' (I can't), just leave it.

It's also a good idea to disable access for Siri and Photo Frame when the iPad's locked, which you can also do from the same Settings app.