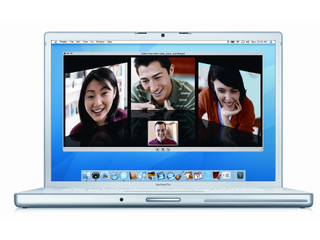 The redesigned MacBook Pro has a new inch-thick aluminium enclosure, better graphics power and memory allocations of up to 4GB

As predicted, Apple redesigned the MacBook Pro. It's given it a new inch-thick aluminium enclosure and ramped up its performance with more powerful versions of Intel 's Core 2 Duo processor, better graphics power and memory allocations of up to 4GB.

The new model is available in a 15-inch version with a new mercury-free, power-efficient LED-backlit display. And there's a 17-inch variant with an optional high-resolution display.

In addition to the 2.2 and 2.4 GHz variants of the Core 2 Duo chip, draft 802.11n wireless networking is introduced as is the Nvidia GeForce 8600M GT graphics chip. It might be mid-range for Nvidia's range of mobile graphics solutions. But it's distinctly high end for Apple customers, who have traditionally been short changed in the graphics department.

"Apple's notebooks have always led the industry in innovation with features like built-in 802.11 and the MagSafe Power Adapter, and now the industry's first 15-inch LED-backlit display is another step toward completely eliminating mercury from our displays."

The Core 2 Duo in the new MacBook Pro has 4MB of shared L2 cache, an 800 MHz frontside bus. There is also 2GB of DDR2 memory, upgradeable to 4GB. It's available now on the Apple Store .