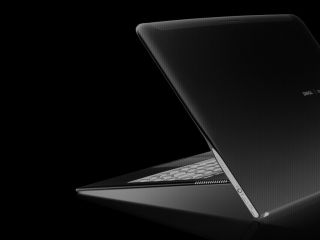 Dell's Adamo XPS is an amazing design all over

Like the Sony X Series, the Dell Adamo XPS doesn't feel quite real; it's so thin and light that you don't expect it to actually turn on and run software, but somewhere inside the 9.9mm thick system is a Core 2 Duo and 802.11n.

Even the latch is an experience; it has a capacitive sensor with a long white power light that you stroke your finger over to wake it from sleep.

No more fumbling to get the machine open and turned on: as the power light turns blue the sensor triggers the two electromagnetic latches in the front corners; when these retract and release the keyboard, the angel of the hinge means that the Adamo gently unfolds.

With the keyboard at an angle, the Adamo is very comfortable to type on; it may take a little balancing to perch it on your lap, but the angle also means your lap doesn't get toasty because there's plenty of air movement.

And thin as it is, the Adamo XPS doesn't feel flimsy, because inside the aluminium case is more aluminium around the screen as a brace: Dell invited us to take it by the corners and twist and even fuelled by a double espresso we couldn't get it to flex in the slightest.

We also got our hands on the updated Inspiron Mini 10 netbook, running on the new 1.6GHz Atom N450 with a 1080p HD screen and a Broadcom Crystal graphics accelerator. Both combine to give it an excellent display; instead of struggling to handle video, the Mini 10 was powering through the new Star Trek game trailer.

An optional speaker bar clips on to the top of the screen which vastly improves the sound. We also looked at the model with built-in GPS, which comes with navigation software that many smartphone users will recognise; CoPilot 8 from ALK, which gives you full turn by turn navigation with 3D maps and integration with Bing searches.

This is excellent software that's even better on a larger screen. Updates to the smartphone versions will soon let you send your location to Facebook and update your status; that's not scheduled for the Dell version yet, but it would be an ideal netbook tool.

The case of the Mini 10 gets a makeover too, with a wedge shape that makes room for the optional 6 cell battery without having it stick out; the angle also gives the keyboard a slight angle to make typing easier on the hands.

It may not happen this year or next year but soon you'll feel that if your device isn't connected, it's broken.

We didn't get to touch the 5-inch Android tablet prototype, but Michael Tatelman, Dell's Vice President of Global Consumer Sales & Marketing gave us a sneak preview of the device.

It has a stylish red case but otherwise looks like a larger version of the Mini 3 Android phone Dell announced with AT&T (and Tatelman told us Dell is in discussion with operators about launching it in Europe).

He also showed a docking station for the tablet that holds it in landscape mode, at a slight angle that would be ideal for watching video. He wouldn't give any dates but said that "Dell is not standing still in what people are mostly calling slate computing and we have a few of these up our sleeve that you might be able to see later this year, in different screen sizes and form factors".