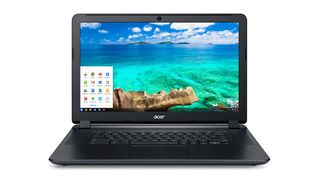 The Google Chromebook won't be the only Chrome OS device sporting an Intel Core i5 processor for long as Acer has just bumped up the specs for its new Chromebook C910.

Acer announced it will offer a faster performing version of the Chromebook C910 equipped with a fifth generation Broadwell Intel Core i5-5200U CPU, the very same processor powering the Chromebook Pixel. Previously we saw this 15.6-inch laptop alongside the Acer Chromebook C740, both of which we're outfitted with a lower-spec Intel Core i3-5005U processor.

With the new CPU in tow, this should give the C910 some extra power to help drive its 15.6-inch full HD display. That said, we had virtually no problems with the 1.5GHz Intel Celeron 3205U-powered Acer Chromebook 15 during the course of our review.

Acer also promises even with higher-octane parts under the hood, the C910 should still last for all-day use with a projected eight hours of battery life.

Aside from the processor bump this machine also features 4GB of memory and 32GB of SSD storage, just enough for most Chrome OS device to get by. Rounding out the package, the notebook is also outfitted with a 1920 x 1080 resolution display, 802.11 AC Wi-Fi, Bluetooth 4.0, USB 3.0 as well as USB 2.0 ports and a built in SD card reader.

Acer Chromebook C910 will retail for $499 and it's expected to arrive in the United States this April. Pricing and availability details for other regions have yet to be announced, but this model should ring up for about £338 or AU$326.