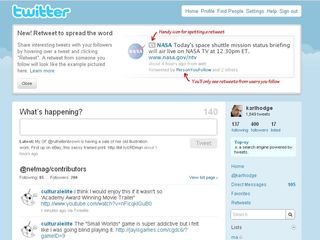 As long as Twitter continues to innovate, with features like lists, the platform grows and becomes more valuable

Twitter, launched in 2006, has become the web's hottest property.

With celebrity endorsement from the likes of Oprah, Lindsay Lohan and Stephen Fry, it now has 75 million very active users. But haven't we seen this all before?

The here today, gone tomorrow fickleness of the web's every shifting demographic has embraced, chewed up and spat out a legion of other services, from ICQ to MySpace. Once favoured toys, they're now forgotten and dusty, languishing at the back of the cupboard.

If we were to assume the same trajectory for Twitter, that would give it a projected lifespan of three, perhaps four more years. On the other hand, it could be one of the lucky ones - a Google, an Amazon or an eBay. It could a transformative service that changes the way we do things.

The consensus among the experts we spoke to is that while everyone believes the microblogging paradigm is here to stay, Twitter as a name is quite another matter.

"Twitter as a company has a limited life, but the spirit of Twitter will live on," says Steve King, Technical Director at digital agency Jigsaw, "Everyone now has a status: 'I'm in freezing Chicago' on MSN and 'Looking forward to the weekend' on Facebook. Soon, my fridge will be able to tell me when it has no milk..."

Paul Bates, UK Managing Director at marketing mavens StrongMail agrees, "The idea of sharing short updates to people you are connected to online will continue to gain in popularity, but whether we do this through Twitter or some other platform remains to be seen".

How will it make money?

The real problem seems to be one that bothers many web services; how will Twitter make money? Without cash Twitter will simply stop tweeting. Experts have plenty of suggestions. The platform itself is one route - and a popular one at that:

"What we find interesting is all the ways that Twitter functionality has been extended across platforms. For example, Twitterific for the iPhone, DSTwitter for Nintendo DS, OpenBeak for BlackBerry..." saysAdam Boyden, President of Conduit, an outfit specialising in online app distribution, "All this development bodes well for the Twitter platform."

"[Twitter] is well placed to extend its already strong APIs, enabling new services and applications to be built on top of it," saysMark Walton-Hayfield, Senior Enterprise Architect at technology consultancy Capgemini, "Essentially the APIs will become the business model."

REAL-TIME SEARCH: Google, Yahoo and Microsoft have struck deals with Twitter to access real-time search results. More solutions like this are needed to fund the service

Paul Beadle, Account Director with Brazil PR, suggests another route for Twitter: Acquisition; "[Twitter's] real time search and trending are vital. My bet is that eventually somebody like Google or Microsoft will buy it". The flipside of that is that the Twitter brand may not survive a buy out, like Netscape before it.

One thing's for certain. The traditional route for web services, advertising, would be a hard sell for customers. And as for premium accounts... "Monetising Twitter is a real concern," says Alex Morris, head of User Experience at Enable Interactive, "People are unlikely to pay for it and ads are about as welcome as a fart in a lift". Charmingly put and 100 per cent spot on.

Over the page, we look at some services that rose to the top of the online pile, only to tumble back down again - and consider the lessons that Twitter might learn from them as it gloomily contemplates monetisation.