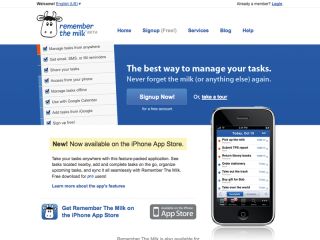 Remember the Milk enables you to manage tasks from your computer or phone, as well as offline

It's a very exciting time to be a web designer or developer. The reason is simple: with a small amount of money, a lot of heart and a great idea, you can take on the giants of the web.

Here we're going to look at some Davids who are taking on the Goliaths of the online world.

For those of you who haven't used bit.ly, it's a simple shortening service that turns horribly long URLs into short little memorable ones.

That might not sound that exciting, but what's bringing it to people's attention is the way that it's snapping at the heels of Digg.com in terms of determining which websites and pages are popular. That's because bit.ly has smart functionality that enables you to see stats on any URLs you shorten (just add a '+' on the end of any bit.ly address).

It also got lucky by being chosen by Twitter as its default URL-shortening service. Consequently, every day there are two to three million unique URLs submitted to bit.ly, compared to Digg's 20,000.

bit.ly also has a secret formula that's going to help it automatically categorise URLs that are submitted to its service – which will make browsing through popular bit.ly URLs very interesting.

That's what's so exciting about launching your idea on the web right now. If you have a great idea and are willing to work hard and mix in a bit of good luck, the sky's the limit.

Even so, you may be looking at bit.ly's $2million of funding and thinking "Gee whizz, that's still a lot of cash" – and you'd be absolutely right. But the good news is that you can launch your idea with a lot less money – because that's exactly what we did with DropSend.com.

For those unfamiliar with DropSend, it's a way of sending and storing large files that you can't email. It was our first enterprise-level web app and we had no way to predict how much it would cost to build, so we had to learn the hard way.

All in all, it cost us a total of £25,780. I've itemised these costs in detail in a post called 'The Cost of Bootstrapping Your App' (part one and part two). If you're a small company and £26K still sounds like a lot of money, don't despair.

You'll be able to spread these costs out over many months. In fact, it took us almost a year to get the financial stability and save the cash for DropSend.

The Balsamiq story is truly amazing. It's a simple little tool for creating mock-ups of websites, iPhone apps and desktop software, started by an Italian software engineer named Giacomo 'Peldi' Guilizzoni and his wife Mariah Maclachlan.

Previously, the only real options for creating mock-ups had been Microsoft's Visio, Powerpoint or Adobe Illustrator. But all of these solutions are expensive and have a huge learning curve.

It's easy to see why Balsamiq is doing so well:

Another interesting thing we can learn from Balsamiq is that beautiful design isn't a prerequisite to success. I'm sure we'd all agree that the design of its site isn't exactly the Mona Lisa – but it works.

That's frustrating for me to admit, as we really care about design here at Carsonified, but nonetheless, Balsamiq has succeeded despite its lack of design flair.