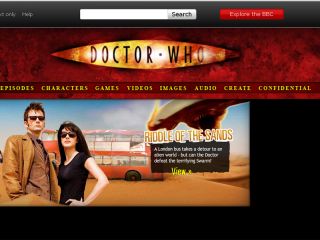 Time was when websites for TV shows were very different to what we have now. Cobbled together from a few press releases and publicity stills, their offering was anything but exhaustive.

Then along came the 21st century and everything changed.

The boundaries between broadcast and online material began to break down. Specially created web video content featuring cast and crew of these television shows began to appear, and URLs at the end of a show became the norm.

TV embraced the web. And no one online presence demonstrates this better than the Doctor Who website.

The personal timeline of www.bbc.co.uk/doctorwho/ begins in London in the late 90s. The BBC series, which follows an eccentric traveller in time and space, had originally run from 1963 to 1989. Despite a one-off TV movie in 1996 starring Paul McGann, it was widely felt the show had had its day.

The website was consequently a backwards looking, nostalgic affair that formed part of the BBC's 'Cult' website offering.

Yet there were clearly a lot of nostalgic people out there. The site attracted a huge following from people with fond childhood memories of Saturday nights spent hiding behind the sofa from scary monsters and robots.

Then suddenly everything changed. In 2005, BBC Wales revived Doctor Who for the new century, with producer Russell T Davies at the helm and Christopher Eccleston playing the ninth Doctor. It was a huge success, winning critical acclaim, countless awards and, most importantly, an enthusiastic new generation of younger viewers.

The relaunch generated a huge amount of content for the website, and the existing templates soon began to feel the strain. Not only did they have to accommodate a massive amount of new content, but they were also suffering from having been built to old compliance standards.

By the time the BBC had three successful series under its belt, with actor David Tennant firmly ensconced in the role of the 10th Doctor, it was keen to revamp the website in terms of both design and user experience.

After a competitive pitch, East London digital agency Preloaded got the job and immediately faced two big challenges: redesigning the site in time for the launch of the fourth series and growing it over time. "We needed to make sure the target audience could find all the content in an engaging and exciting environment," explains Preloaded's joint managing director Paul Canty.

Planning the Dr Who site redesign

The first phase of the project was to create a new look and feel in which to launch content for series four.

Content requirements were mostly led by the internal BBC team, working closely with the show's executive producers and brand team. "We met them regularly as we moved through the project," says Canty. "We used collaboration tools such as Basecamp and, of course, made lots of phone calls."

The two camps worked together more as one project team rather than the usual client/agency model. Doctor Who is such an important property for the BBC and has such a loyal fanbase that it was vital to get everything spot-on.

This included the Preloaded team travelling to Upper Boat, three miles outside of Pontypridd, where the series is filmed.

"The trip was invaluable," says Canty. "We got an insight into the production of the show and Jon Mallinson, our lead designer, was able to get immersed in its design. Visiting the TARDIS was pretty cool!"

Unfortunately, the TARDIS was unable to hold back the rapidly advancing transmission date of series four. In the absence of real-life time travel, Preloaded adopted a rapid development process that took principles from Agile methodology to deliver page templates to the BBC.

These were then implemented, with feedback being given and amends taking place in rapid-fire succession. "We pointed Preloaded in the direction of several sites that appealed to us, and suggestedthe TARDIS-like embellishments to the pages, as we felt that the 'Gallifreyan Symbols' look [the language of the Doctor's home planet] had been overused," says Doctor Who's new media producer Rob Francis.

Simon Rooney, lead designer on the BBC web team, worked closely with Preloaded to develop the inspirational look and feel of the site, while technical project manager Andrew Dudfield made sure that that the information architecture would work with BBC systems. "The challenge," says Dudfield, "was the fine line between something that looked amazing but was impossible to build, and things looking too functional."

Maintaining a good user experience that allowed for quick and easy access to contextual information was paramount to the site's development. It needed to be intuitive and be based around a three-column approach, which would centre around the promotion of the current episode. It would also become one of the first BBC websites to use the new 974px width layout.