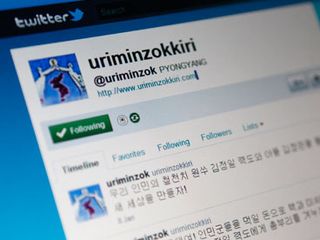 Hackers from South Korea have been using North Korea's official Twitter and YouTube accounts to poke fun at Kim Jong-il and his son, Kim Jong-un.

A video posted by hackers on the regime's YouTube account may have been the most damaging, showing an animated Kim Jong-un running over impoverished North Koreans in a gift-laden sports car.

Retaliation by North Korea saw a South Korean website suspected of carrying out the attacks suspended.

The North Korean authorities threatened "grave consequences" for any South Korean found to have insulted the Kim family, while South Korea has already indicted one Twitter user for praising the Kim family's regime on the micro-blogging site.

Even retweeting a North Korean tweet can land South Koreans in trouble, with the Seoul justice ministry threatening punishment to anyone who tries to make contact over Twitter.

Trading online insults may seem juvenile on the surface, but the situation certainly makes us glad to live in a society where we can send tweets to whoever we like without facing dire consequences - well, as long as we're not threatening to blow up airports or anything.