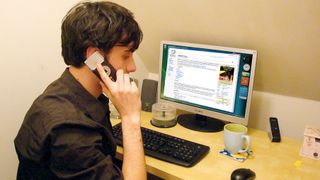 Do you spend your evenings sitting in the kitchen, counting how long it takes to fill a bucket of water from your cold tap, then sending angry emails to your water supplier when it's not filling as fast as Simon's identical bucket is three doors down on the same street?

Probably not. That would be weird, wouldn't it?

It still works. You still get water out of it. There are no obvious bits of poo or dead insects in it, and the toilet flushes. In fact all of the toilets flush even at the same time (you checked), so all's good, right?

This week saw consumer rights campaigner Which? lambast our ISPs for not delivering Internet speeds as high as they promise on their adverts, a shady advertising practise that's perhaps a little unfair, yes, but surely a state of affairs that can hardly be avoided when trying to get 1950s copper to channel 2015's HD Netflix to everyone's tablets simultaneously in a small village in Somerset.

It seems a little bit unfair on the ISPs, like measuring your mains water pressure or moaning to Vauxhall that the speedo on your Vectra goes up to 120mph, but forgetting to mention that whenever you try to go that fast you're limited by physical constraints like road speeds, cameras, corners, traffic, the price of petrol and not being able to find your favourite going-fast CD for a psychological boost.

There are, similarly, quite a few factors involved in getting the internet working in streets and your house, not least managing to plug everything together properly.

How many people reporting crappy internet speeds are reaping the rewards of their own crappy cabling? Or interference, or a slightly damp microfilter, or a computer so full of malware and P2P software they're serving more data to more people around the world per hour than Google?

Plus your ISP can't really help it if everyone on your street is so into Game of Thrones they're torrenting the same HD files all day and night. You can't have adverts that bespoke, promising a connection of "...up to 16Mbps, unless Dave up the road has got a binge-on for House and is grabbing Series 6 off the torrents, in which case you'll be lucky to see 9Mbps, and that's only if Mrs Johnson's three children aren't all watching YouTube, in which case..."

My Internet's a bit flaky. I usually get by on around 6Mbps, but if it's windy or wet, it can drop to 2Mbps for reasons, I suspect, to do with moisture or sheep standing on cables. It doesn't ruin my life, just makes it unfold at a bit of a slower pace.

In fact, I've learned to quite like slow internet days, as it means the wife gets off YouTube and stops playing her horrible music, plus the children, frustrated by buffering YouTube and iPlayer, might actually be tempted outside to throw stones at things and unfamiliar people like we used to do for fun in the olden days.

You wouldn't complain to your local council that there are too many other cars on the road, so why is everyone such a whinge-bag about their internet speeds?

It's probably because it's modern and electrical, and bordering on the sort of magical thing we can't understand. It's only wires, they ought to just work at their maximum all of the time and be uninterruptable and reliable, like gravity, shouldn't they?

The internet is also measurable. We get a number saying if it's a good or bad connection, a number that can be compared and moaned about, plus, hopefully, used as a bargaining tool to save £2 a month come renewal time. It's easy to get obsessed about numbers, hence the fury when we perceive we're being shortchanged by the ISPs. It's like getting on a bus that's overtaken by another bus. Or the worst thing in the world.

How about the ISPs hit their speed target promises if connections cost three times as much per month? Or how about you get more Mbps in return for a restricted service, where P2P networks are blocked and VPN use is outlawed so connections in urban areas don't get so snarled up by hoarders queuing up downloads of everything HD?

There wouldn't be much of a rush to register for that one, regardless of the test results.