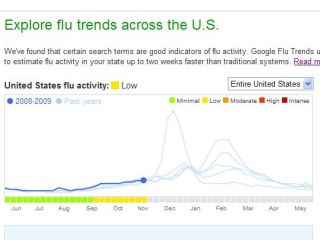 Google has announced the arrival of its influenza tracking Google Flu Trends in much of Europe, but the UK is still not covered by the service.

Google's Flu Trends uses search data (such as someone typing in 'flu remedies' into Google) to track cases; and the service has proven very useful for tackling outbreaks in the US.

The service was rolled out to a few more countries recently, and now has made it to much of mainland Europe.

"If you're like us, you're probably thinking a lot about how this year's flu season might affect you and your community. To help you out, we at Google are excited to announce the expansion of Google Flu Trends to 16 additional countries, including much of Europe," blogs Google.

"We've also made the site available in 37 languages. Flu is a global threat, affecting millions worldwide each year, so we're pleased to make this tool available in more regions and languages," the blog adds.

So, although ex-pats in the Dordogne can check out the French 'flu' zones (currently the country is on 'moderate') and Swedes can revel in their 'low' 'flu occurrence rating, the UK is a blank.

We've obviously asked Google why this is, but in the meantime you'd be best off moving to Australia, which is currently green for 'minimal' 'flu occurrences.