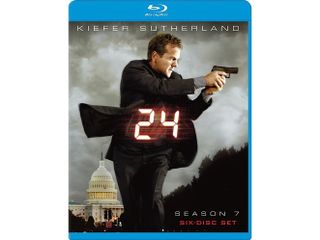 In an experiment which could spark the end of long waits for DVD and Blu-ray releases of your favourite TV shows, 20th Century Fox has shipped 24: Season 7 to shops in the US just a day after the finale premiered on TV.

The move is something that will be welcomed by fans of the show who usually have to wait up to three months for disc releases, and shows that the studio is ready to fight piracy head-on.

Unfortunately, the quick turnaround will not be repeated in the UK, where we will have to wait until October to get the Blu-ray. This is a huge shame as, even though the show is still airing on Sky, October is a very long time to wait.

One of the main reasons that Fox can release the boxset so quickly is because the seventh season of the show starring Kiefer Sutherland has been in the can for some time.

Last year's writers' strike meant that there was a delay in showing it on TV which subsequently meant that disc authoring could be done way before the last episode, which aired on 18 May in the US.

The home entertainment market has always been hugely lucrative for big shows like 24 and Lost, with some consumers waiting until they are released on disc so that they consume more than one episode at a time.

The New York Times spoke to Gary Newman, the Fox studio chairman, about the quick release who noted: "Everything that we do today is looking for an edge to juice the sales" and also that "in everything we do, piracy is part of our equation."