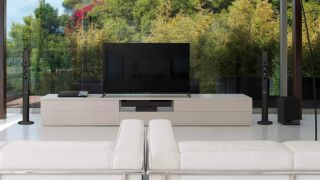 In case you didn't buy the PS4 and don't have a Blu-ray player, Sony has a new all-in-one home cinema package, the BDV-N9200W Blu-ray Disc Home Cinema System.

Featuring multi-channel 5.1 surround sound, Sony is boasting its new speakers to have been built with Magnetic Fluid Speaker technology - which is tech that originally developed by NASA, according to Sony.

The speakers use magnetic fluid material, which is meant to reproduce all spectrum of the recorded sounds as faithfully as possible.

Sony is also touting its surround sound speakers to have been specially engineered to recreate the way audio is delivered in the London O2 Arena.

Besides the speaker tech that Sony is boasting, the Blu-ray all-in-one system also allows users to stream music from home networks or via connected USB drives.

Music can also be streamed from smartphones and tablets via Bluetooth or NFC. These wireless connections also allows for mobile screen mirroring