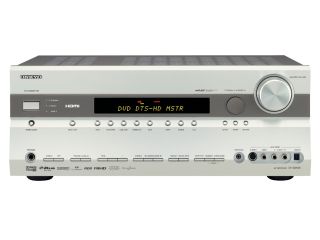 Subscribe to Home Cinema Choice at the London Sound &amp; Vision Show this weekend and you could win an Onkyo TX-SR605 home cinema receiver

Visit the London Sound & Vision Show 2007 at the Heathrow Park Inn this weekend and you could own the award winning Onkyo TX-SR605 7.1 channel receiver (pictured) by Monday!

As part of a special show promotion, visitors who subscribe to our sister magazine Home Cinema Choice at the show will not only save money on the street price of the magazine but also be entered into a prize draw to win the award-winning Onkyo TX-SR605 7.1 channel receiver.

Winner of the European Imaging and Sound Association (EISA) home theater receiver 2007-2008 award, the model is the world's first to incorporate onboard decoding of Dolby TrueHD and DTS-HD high-resolution soundtracks.

Commenting on the award the EISA judging panel said: "Onkyo's TX-SR605 is a very talented performer. It's the first AV Receiver to include HDMI 1.3, and offer decoding of new sound formats such as DTS-HD and Dolby True HD.

The London Sound and Vision Show 2007 is sponsored by Home Cinema Choice and its sister title Hi-Fi Choice. The event, which features live demonstrations of the very best in hi-fi and AV, runs at the Park Inn Hotel, just by London's Heathrow Airport from 21-23 September 2007. Friday 21 September is a trade-only day, with the show open to the public on Saturday from 10am.