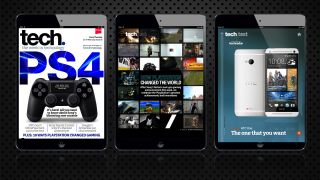 Sony's big PlayStation 4 announcement this week divided opinion, with some gamers appalled that the console itself wasn't shown off, and others delighted by the big leap in graphical performance. This issue of tech. magazine is packed with information

It's been a huge week for tech, and tech. magazine has all the reaction to HTC's new smartphone, and an in-depth look at its brave new camera tech that could make or break the company.

That's not the only smartphone news, and we have a full interactive review of the Sony Xperia Z dubbed 'the best Android phone ever' and discover why Nvidia has announced another Tegra 4 chip.

With all the PlayStation talk this week, tech. magazine has its own list of the biggest innovations we can thank the Japanese giant for.

"As well as covering the latest news, the issue is a celebration of all things PlayStation. The beauty of tech. magazine is that it gives us the opportunity to reflect on 15 years of epic gaming and don't forget to have a play with our cover," said editor Marc Chacksfield.

Grab the latest issue of tech. from iTunes now. And don't forget that you get a fantastic five issues free.