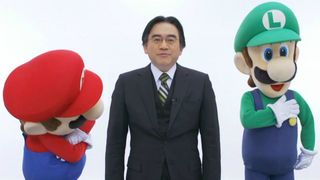 Every year, Nintendo holds a shareholders meeting where anyone invested in the incredibly successful video game company gets the chance to fire off questions at its talented, interesting and hugely intelligent senior figures.

These conversations are later translated and published online, and this week we got a look at the latest. Were any of us regular video game fans allowed in, we'd be asking the tough questions - when will you release the next Zelda? Why haven't you made another Super Mario Galaxy? What happened to those E3 puppets…?

Unfortunately, some of the people with enough disposable income to invest money in businesses are apparently dry, humourless suitpeople with approximately zero knowledge of what video games are, what Nintendo does exactly, and how the company makes all that money that they get a cut of.

As such, we get questions like this one, a baffling request from someone who "seldom plays video games": "to [be able to] purchase, wear and own Nintendo-related products at every occasion possible", and " to place [their children's] faces onto in-game heroes or heroines".

It must be disheartening to find out that some of your investors, the elephants upon the backs of which your world rests, have absolutely no clue about your business.

You know what's not difficult at all? Finding Nintendo-branded apparel. Nintendo gear is in short supply in the same way that postcards, teatowels and mugs that tell you to Keep Calm And Do A Thing are, and as for having customisable characters - yup, that's what Miis are, and as Eurogamer points out, they're a decade-old feature of Nintendo consoles.

Honestly, it's like going up to Apple and advising them to stick their logo on all their products.

However, it's not the first time that shareholders decided that their support of the company allowed them to stick their meddling fingers all up in Nintendo's business.

Last year's meeting involved one of the investors whining that they didn't "understand video games" and thus felt angry, because "the shareholders always discuss things relating to video games or such childish topics as "what the future of video games should be".

Let's talk about that cafeteria, hey?

The meetings are often infused with a strange sense of entitlement, like this investor who gave CEO Satoru Iwata the old worried mum treatment: "I see Mr. Iwata is a very conscientious person.

He is so sincere that, in my view, he is trying to take on all of the things related to the company's current situation by himself and I think it might have made him ill...Mr. Miyamoto seems more resilient and is better at taking everything in his stride. I hope Mr. Iwata will take this advice and use it to make him a better president."

What is even going on there? This person has bought shares in a company, just to use that privilege to wag their finger at Iwata - who, might I add, is 55 years old, and therefore probably not a complete stranger to health issues - by telling him he's not as "resilient" as a co-worker?

Or how about the amateur businesspeople who suggested ideas like "the return of Virtual Boy" or giving away "Tingle's Balloon Fight DS" to investors? Or the one person who clearly bought a single share in the company just to complain that "I heard that the quality of the company cafeteria is not so good from one of my acquaintances"?

And lest we forget that time an investor suggested Nintendo release DLC that makes Mario more powerful: "Just think of paying 99 cents just to get Mario to jump a little higher."

Just savor that quote for a moment. Really process it.

For the record, the Nintendo execs handle all this with the patience of a particularly put-upon saint. They thank all these people that turn up at their doors wanting to know why they don't sell cake, or why the toilets aren't clearly signposted, or why their return policy on dead parrots is so strict, where most other people would slam the door in their face and pour boiling oil out the window.

Maybe we should all buy shares in Nintendo, so we can start asking the real questions: did my primary school friend Janine's uncle ever really work for Nintendo? And were her whispered rumours of a real-life Pokemon petting zoo ever true??

Eh, whatever. Let's just watch the nice video where Miyamoto is revealed to be a Muppet fanboy.