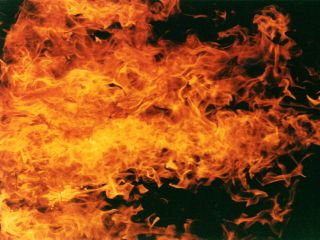 Danny Williams was understandably concerned when his iPod nano suddenly burst into flames in his pocket...

Would you believe it? Apple's only gone and made the front page again. Admittedly perhaps not in the manner it would have hoped for (the ability to spontaneously explode isn't usually top of an iPod's spec list) but even Apple isn't perfect...

An American airport worker faced double jeopardy this week when his iPod nano caught fire in his pocket. His immediate concerns after noticing flames shooting out of his trouser pocket soon heightened with the realisation that armed security staff could mistake him for a terrorist and open fire.

Meanwhile, a 14-year-old girl from Texas received double disappointment after purchasing an iPod. Upon eagerly opening the box she came face to face not with the expected brand new iPod, but a box full of rocks.

As you'd expect, the iPod was promptly returned and a replacement - from a second branch of the chain - was provided. .. only for the girl to find more rocks. Unbelievably, the store still imposed its in-store credit only policy. Talk about insult to injury.

In Apple's favour, however, came the news that an iPod touch is "so simple even a dog can use it" (there's even a video to prove it).

Mind you, Bill Gates didn't have it easy this week either. The multi-billionaire Microsoft chairman was refused entry to Nigeria after failing to convince authorities that he would not stay in Nigeria and become a drain on the country's resources. Fortunately a letter from the bank proved sufficient to reassure the officials that this would not be the case, and a visa was eventually approved.

Want to walk through walls?

This week saw the discovery of one of the more unusual patents applications we've come across for a while. Entitled "Walking through walls training system", the proposed invention involves granting a human enough hyperspace energy to "pull the body out of dimension", enabling them to walk through solid objects like walls. Personally, we've always been fans of the humble door - but you can't please everyone.

The news we've all been waiting for: the quest to find the world's oldest Halo 3 player is over at last. And the proud title-bearer? A 95-year-old Japanese grandmother - check out her skills here.