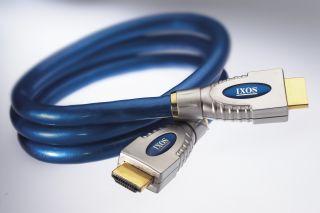 As we let slip a few weeks ago some leaked details about HDMI 1.4, the next generation of connectors that are set to see the AV industry through the likes of 3D and beyond.

Now the makers of HDMI 1.4 have made the details official, re-iterating the enhanced functionality the cables will come with.

Just confuse everyone, not all the new connectors will have all the features mentioned above.

So, to help you out, we have added which cables will have which new functionality.

The new features include:

This brings HDMI into the web-connected world, by enabling high-speed bi-directional communication.

It will also mean that web-enabled HDMI devices can share its internet connection without the need for a separate Ethernet cable.

HDMI 1.4 has the added bonus of an Audio Return Channel – this again that will reduce the number of cables as it means the cable will deliver audio upstream for processing and playback.

Essentially it allows your HDTV to send the audio stream to the A/V receiver over the HDMI cable, eliminating the need for an extra cable.

Found on: all new HDMI 1.4 connectors

If the likes of James Cameron and Pixar are to be believed, 3D is the next big home cinema thing, so it's lucky then that HDMI 1.4 will hand 3D footage.

According to the press release 'the specification will standardise the input/output portion of the home 3D system and will specify up to dual-stream 1080p resolution.'

In short, all 1.4-enabled devices will be Full HD 3D ready.

And you thought Full HD was the best resolution a TV could get. Something called the RED camera is doing the rounds at the moment, which shoots footage up to 4K (4x that of 1080p), which is so clear it will make your eyes bleed.

Give it a few years and 4K sets will be in the home market place, with some projectors already capable of showing this type of content.

HDMI 1.4 will also offer more colour support than its 1.3 counterpart. This is essentially for those with fantastically specced digital cameras that handle colour spaces like sYCC601, Adobe RGB and AdobeYCC601. The new connector will add a bit more colour into your pictures.

Found on: all new HDMI 1.4 connectors

There will also be car support. This means that you will now be able to pimp your ride with HDTVs, without the fear that heat, vibration and noise will stop your cables working.

Also announces is a Micro HDMI connector. This is a 19-pin connector that will support 1080p for portable devices.

As those with Full HD camcorders will know, there's already a HDMI Mini Connector on the market at the moment, but this new cable is set to 50 per cent smaller.

The HDMI specification 1.4 will be available for download on the HDMI LLC website (www.hdmi.org) no later than 30 June. So, expect manufacturers to start shipping 1.4-enabled goods soon after this.