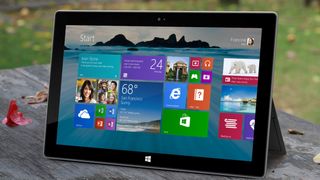 Microsoft's Surface Pro: Not a patch on upcoming Haswell tablets

Intel's new Haswell processors are imminent and I'm getting excited about what that means for tablets.

You can already have a tablet PC with a full-on Intel Core processor, of course. I don't mind admitting that Microsoft's Surface Pro has me dangerously tempted.

But I'm glad I've resisted thus far. Good as Surface Pro is, it neatly underlines why it's worth waiting for these new Haswell chips.

At a glance, Surface Pro looks like a dead ringer for the ARM-based regular Surface running Windows RT. But closer inspection reveals it's thicker, heavier, requires fans for cooling and generally isn't quite the non-compromise Windows 8 tablet I'm waiting for.

But that should very much be possible with Haswell. The lawyers are looming, so there's an awful lot of NDA material on Haswell I can't quite divulge.

But Intel has gone on the record to say that Haswell is the biggest leap in power efficiency in its history. Bigger even than the jump from Pentium 4 to Intel Core. If true, that's pretty epic.

The graphic core count leaps from 16 to 40 units and the top version gets 128MB of embedded eDRAM. Basically, Haswell graphics are going to be much, much faster, which can only be a good thing for that full-on PC experience in a tablet.

Given that existing Ivy Bridge chips are tantalisingly close to being suitable for tablets, I'll go ahead and predict that Haswell in a tablet is going to be awesome.

Personally, I have no interest in dragging around both a laptop and tablet when I'm on the road. But that's exactly what I have to do currently if I want both the full x86 experience and a sleek touch device for more casual computing concerns.

Yup, I've flirted with the idea of ditching Windows for Android or iOS when on the move. But my thought process always weaves back to the same conclusion. If I could have Windows 8 in a proper tablet device, that's what I want.

In other words, it's the hardware, not the software, that has so far prevented me from dropping my laptop for a Windows tablet. And Haswell very much looks like the enabler for getting me over the hump.