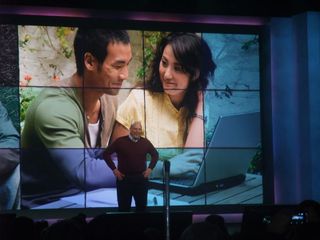 The beta release of Windows 7 that Steve Ballmer announced at CES last night, that will be available for everyone to download free on Friday, looks rather like the build that leaked in December.

The only major new feature is that the user interface Microsoft showed off in October is finished, with large, permanent icons on the task bar, preview thumbnails of individual documents and browser tabs, and jump lists for common tasks.

When he called it "the best version of Windows ever," Ballmer didn't announce any major new features: instead he mentioned simplicity, reliability and speed, along with media features and touch. The big surprise in his keynote was that there were no surprises. And that's actually good news for Windows 7.

Ballmer predicted "the kind of tech transformation that only happens once every 10 or 15 years" not from more features in Windows, but through "the convergence of the three screens people use every day" (which Microsoft counts as the PC, the phone and the TV, plus the cloud to connect them together).

Showcasing the range of exciting PC form factors on the market, from the Asus Bamboo to the Voodoo Firebird gaming desktop, suggests the usual subtle comparison with Apple's limited range of hardware. And he put Windows in the middle, not as the main attraction but as "the lynchpin bringing it all together". After all, you use Windows to get things done, not for the pleasure of using Windows.

The features that might once have gone into Windows are now in Windows Live, which can be updated more often than Windows, and without Microsoft being accused of stifling competition by building in too many extras.

The final version of Windows Live Essentials is available now, and Dell will be pre-installing it on all new consumer PCs. There are new features on the way already; you can connect your Facebook and Windows Live accounts so that status updates and photos from Facebook show up in the What's New section of Windows Live. And Hotmail will get a Quick Add pane where you can search for information and insert it into the email you're writing instead of opening another browser window (however easy Windows 7 makes it to see those side by side).

Internet Explorer 6 will reach Windows Mobile phones this year, with Flash support, although Ballmer didn't say when or how it will be available. And the Kodu game development tool originally designed to teach children to program won't be relegated to a dusty educational niche; it's going to be available on Xbox Live, where kids may not even notice they're learning programming while they play.

Touch is the first step to more intuitive and natural user interfaces, but Windows 7 is a platform for developing these rather than the finished solution. "In the next couple of years," Ballmer predicted, "computers will be able to see you and hear you; speech, gestures and handwriting will become the normal way of how we interact with computers, TVs and phones."

Ballmer showed a colour screen less than 1mm thick that's similar to the e-ink screens in digital book readers but flexible enough to roll up and put in your bag, to use with a phone or a laptop as a second display.

Ballmer's predictions of more personalised computing also built on technology that Windows 7 will introduce, like the sensor and notification frameworks. "You'll have software that learns your habits and predicts your needs. When you say 'Get me ready for my trip' it will know what time of day you usually fly and what kind of hotels you stay in. Communications will move seamlessly between voice, text and video, and software will know whether to interrupt you based on what you're doing and who's trying to reach you."

Microsoft researcher Eric Horvitz calls this 'considerate computing' and it needs fundamental technology in Windows, as well as smarter applications, devices and connections between them. If Windows 7 really does enable that kind of intelligent assistant, it will be a lot more important than changing the look of Explorer or adding more features to Windows 7. And perhaps Steve Ballmer was keen to show the CES crowd who has watched Bill Gates open the show for 15 years that the vision didn't leave Microsoft with him.