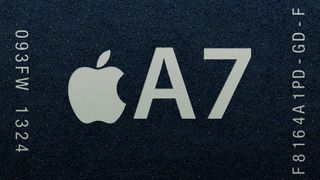 Could Apple ditch Intel for CPUs?

The short answer? No, there won't be a Mac that runs on the A7. It just doesn't have the performance. But an A9 or A10? That's less clear.

Rumours that Apple is looking to replace Intel's processors in its Mac range have circled ever since the company first revealed that it was making its own chips for the iPhone and iPad. Apple's success has been built on integration and the idea of controlling everything from the development of the hardware to the optimisation of the software to make it the best possible experience.

Macs, however, use a lot of third-party hardware in their construction, with Intel's chips being one of the most prominent. This partnership has offered great advantages, though, with Intel's and Apple's priority largely in alignment at the moment: power management.

Apple's best-selling Macs are its laptops, and with Intel having previously focussed on computing power over energy usage, it's now putting its considerable effort into making its mobile chips as electrically frugal as possible - a process that has resulted in the excellent battery life on the latest MacBook Airs.

Yet Intel is still miles behind the technology that underlies Apple's A-series chips. The architecture of Apple's chips has two advantages over Intel when it comes to power use: it uses literally a different way of processing information that's more efficient; and the chips are less complex in design. The flipside of being simpler, though, is that they're less powerful, even if performance is improving significantly every year - the dual-core A7 in the iPhone 5s appears to be slightly more than a third as powerful as the Intel Core i5-4250U processor in the latest MacBook Air (based on Geekbench scores).

Both of these chips are dual-core, with a clock speed (meaning the frequency of operation) of 1.3GHz. That there's such a difference in performance at the same clock speed tells you a lot about the more advanced design of Intel's chips, but if Apple were to look at putting its chips in a Mac instead of a mobile device, it could make some changes to the design, particularly since it would have to worry less about the amount of power used and heat produced.

In the first instance, Apple could increase the clock speed, though this is no magic solution to better performance - increase too far and you start to get steep increases in the power needed for even modest additional gains. Some architectures are also optimised for lower-clocked operations, including Apple's.

"Apple has made some very specific design choices that will make it incredibly difficult, if not impossible, to take the A7 and run it at anything like 3GHz," says David Kanter, principal analyst at Real World Tech. He gives the example of the small memory cache on the CPU - Apple uses a cache twice the size of Intel's that's accessed more efficiently. It's a great design, but it doesn't scale up to desktop chips.

Doing it this way at something like 3GHz would increase the power needed for that one task hugely - Apple has optimised for low-power, low-speed chips. Turbo Boost However, a more modest increase to something like 1.8GHz is feasible, especially if combined with something akin to Intel's Turbo Boost mode, which lets CPU cores produce much higher clock speeds for short times under heavy loads.

Apple could also switch to a quad-core design, doubling the number of CPU cores available, but again, this isn't quite the fantastic solution it might sound: it only produces significant speed increases in apps that can split their processes to take advantage of more cores.