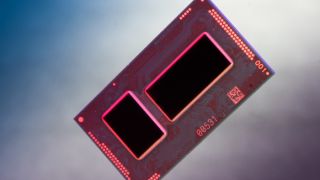 The name's Intel Core M, but my friends call me Broadwell

With the introduction of its latest processor, the Intel Core M (or "Broadwell," for those keeping up), Intel is just following the law - Moore's law.

Moore's law states that the density of transistors in integrated circuits will double every two years, and Intel's latest 14-nanometer process fits that road map nicely.

With Broadwell's official introduction as the Intel Core M the company is naturally promising a bevy of improvements over its last microarchitecture, including improved performance and decreased power consumption.

Watch microscopic (literally) Intel Senior Fellow in the Technology and Manufacturing Group and Director of Process Architecture and Integration Mark Bohr explain it all in the video below.

Chip off the old chip

Intel's new 14nm manufacturing process and improved transistor design make Broadwell its best chip yet, according to the company.

It "will usher in a wave of innovation," Intel said in the processor's announcement, expecting systems that will be thinner, quieter and cooler.

Cooler especially - the company said the Core M runs half as hot as previous generations.

Intel promises the first Broadwell-equipped systems will arrive in time for the "holiday selling season," so expect to see the new chip in devices slightly earlier than expected (not that we're complaining).

The chip will get into the hands of more OEMs in 2015, the company promised.