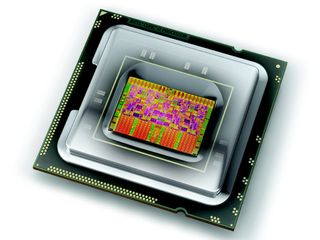 There's absolutely no doubting that Intel's new Core i7 processor tears through the usual geek-pleasing benchmarks at a stupendous rate. But what difference do all those threads, channels and flops make to real-world performance?

In other words, forget floating point throughput and raw memory bandwidth. How much better is a PC powered by Core i7 for the kinds of applications and tasks that mere mortals use on a daily basis?

Like dumping a whole bunch of files into a zip folder, installing applications and transcoding music files in iTunes. Or, heaven forbid the need should strike you, reinstalling Windows.

To find out, we've knocked up perhaps the most unfair and partisan PC twin test of all time. Cowering in the green corner is a representative of what you might call the average PC. In honour of the ongoing US elections, we'll call it Joe Dual-Core.

It's powered by a 2.0GHz AMD Athlon 64 X2 dual-core CPU and 2GB of DDR2 memory. Storage comes courtesy of an absolutely ordinary 320GB hard drive spinning at 7,200rpm. The brand doesn't matter, but for the record it's a Samsung drive. It's certainly not the best AMD can offer. But it is the sort of ordinary, honest, God-fearing system that most of you are probably using right now.

Floating like a butterfly in the blue corner is the best Intel can currently offer. That means the shiny new £1,000 Core i7-965 Extreme Edition processor running at 3.2GHz and backed up by 3GB of DDR3 memory in a triple-channel arrangement.

This dark destroyer is also running Intel's pricey new solid-state memory drive, the £400 X25-M in 80GB trim. As the great Ali would say, this machine is so mean it would make medicine sick and hospitalise a brick.

First up is the Windows Vista installation routine. Given the general ghastliness of Vista, it's ironic that one of the few things Microsoft managed to clean up compared with Windows XP is the installation process. It's relatively simple and quick.

Ironic because only a relatively small proportion of PC users ever install Windows themselves. Still, should the need arise, you'll be grateful for a PC that keeps the pain to a minimum with a quick and easy installation process.

Joe Dual-Core makes a pretty decent fist of it. Excluding the initial time taken to boot to the initial installation menu using the Vista DVD (that is dependent on the motherboard and can vary quite dramatically), it will take you just over 17 minutes to load Vista and reach the desktop for the very first time.

Moving over to the great blue hope, that time is cut to around 12 and a half minutes. Quicker, but perhaps not as dramatic an advantage as you might expect. Much of that is down to a common performance bottleneck in the form of the DVD drive.

Another common workload that is limited by optical drive speeds is large application installation from DVDs, games being the obvious example. Installing the popular strategy game Company of Heroes: Opposing Front is a 13-minute chore on our average-Joe machine. By contrast, the finest PC technology available to man only cuts that down to the tune of around 30 seconds.

But from here on in, things get a lot more exciting. Importing and transcoding large quantities of music files is a pretty common event in our sharing and not so caring - about copyright - modern digital culture. Converting a sample album of 15 tracks to AAC in iTunes is the work of just over three minutes on the Athlon box. On Intel's uber rig, it takes just one minute.