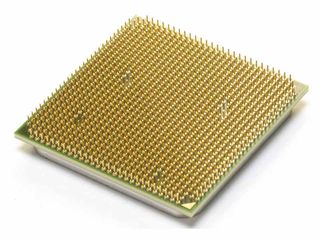 The suffering is over for AMD. The Phenom II processor officially launches today and it's an enormous relief to report that the new quad-core chip is a big improvement over the buggy, slow running first generation Phenom CPU.

TechRadar has carried out a full review complete with a bucket load of benchmarks. The short version goes something like this. The new Phenom II is not a revolutionary new design. For the most part it carries over the core architecture of its predecessor. But thanks to a successful shrink to 45nm transistors, it sports much improved performance and power efficiency. It is also officially free from bugs.

The headline news is a leap in clockspeed from 2.6GHz for the old 65nm Phenom to 3GHz for the new flagship Phenom II processor, the 940 Black Edition. That's not enough to take the performance crown from Intel's awesome new Core i7 processor. But it does give AMD a much more competitive CPU where it really counts - the meaty mid-range of the CPU market.

That said, the 3GHz official clockspeed does not tell the whole story. The new 45nm silicon is much more amenable to overclocking than AMD's old 65nm technology. You were lucky to get a few hundred MHz of headroom out of a 65nm Phenom. But some early Phenom II samples are hitting 4GHz on air cooling.

Power efficiency is another strong point for the new chip. Comparing the old 65nm flagship Phenom to the new Phenom II 940 Black Edition, overall platform power consumption drops 243 watts to 187 watts. Considering those figures are based on systems with the same motherboard and peripherals including hard drive, memory and graphics card, that's a massive boost in efficiency.

Price wise, the 940 Black Edition is likely to sell for around £230 including VAT. At launch it's joined by the slightly lower clocked Phenom II 920, a 2.8GHz chip. Both models are otherwise largely identical, with four cores and a grand total of 8MB of on-die cache memory. However, the Black Edition does benefit from an overclocking-friendly unlocked CPU multiplier.

Both chips are compatible with existing AM2 and AM2+ motherboards and support DDR2 memory up to 1,066MHz. They should already be available from your favourite online retailer and are surely worthy of shortlisting for anyone looking for an affordable quad-core processor.