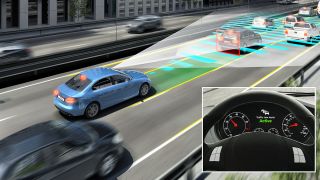 Get out of the way, moron, robot coming through!

Bosch, maker of everything from washing machines to laser beams, is plotting an army of thinking robocars. We've had a ride in one of them and it was… You know… Alright. Whatevs, really.

Our demo took place at the company's own test track near Boxberg in Germany. That's because autonomous cars remain broadly illegal on public roads with testing strictly limited to a few locations. That's a bit of a problem for Bosch and others, of course.

This means that we didn't really get a feel for how the car would cope in the cut and thrust of real roads and traffic. Far from feeling threatening, being in this thing felt almost dull. Like being in a taxi, but with a less chatty driver.

Despite that, if you have even an ounce of imagination, you cannot help but be thumped squarely between the eyes with a vision of an automated future as you ride the Bosch robocar. For starters, there's the mesmerising twirling of the steering wheel, all on its own.

Then there's the big LCD display. It's clunky and not something that would appear in production car, but it does provides a window into the "mind" of this thinking car.

You see, in real time, that it's scanning and mapping pretty much everything in the vicinity. The way it picks up and tracks other cars and people in an instant is sobering.

Sobering, that is, in the sense that it's all too clear just how close to retail reality these systems are. This stuff works and it makes human drivers seem instantly quaint. Indeed, while there are still plenty of humans who deny autonomous cars will ever be able to fully replace human drivers, we suspect none of them have had a ride in something like Bosch's robocar.

However, while serenely navigating Bosch's test facility is mightily impressive, it seemed like a leap, to me, to assume the tech would be ready for the open road or city centres.

That, however is what Bosch intends: it reckons its driverless cars should be on our roads by 2020.

Current page: From test track to motorways in 5 years?