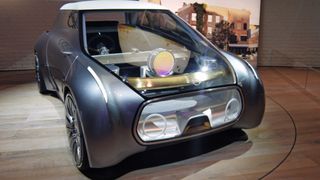 Mini has unveiled big future plans for its tiny car, which it calls the Vision Next 100.

This car is a bag of ideas that Mini envisions coming to life in the next 100 years, but the best bit is that it actually built a working prototype for 2016.

Beyond looking totally barmy, the Vision Next 100 car is all about personalisation. Or, as Mini Design Chief Anders Warming puts it, "creating a relationship with your car," whether you're controlling the wheel or the thing is driving itself.

We went along to an unveiling of the model and managed to get as close to it as we could without the security guys tackling us to the ground.

Vroom for one more

The first thing you'll notice is the shape: the model keeps in line with Mini's typically compact design. In fact, the car you're looking at is shorter than today's three-door Mini hatchback.

It's been designed so small not only to continue Mini's design legacy, but so it's perfect for urban driving.

Aside from Mini's characteristic circular lights, the front of the car makes it look like it belongs in Minority Report. "We brought the front windscreen way forward to create space inside the car. The engine is not there where it used to be," said Warming.

But side-on and from the rear this still has noticeable Mini traits, including the floating roof. "This car is the perfect balance between where we've come from and where we want to go," he added.

There aren't any screens in the car - instead information is projected on the windscreen. The idea is that the user interface is actually absorbed into the vehicle, which will adjust itself to your personal preferences before you get in.

In theory this means you could drive to London Heathrow, jump on a plane, and on the other side get in what feels like the same car. It probably even came to pick you up - the Vision 100 car will know your schedule, says Mini.

While there might be no dashboard display, Mini has made a kaleidoscope-looking device called the "Cooperizer" (a portmanteau of John Cooper and Energizer) which sits on the dash.

This is the all-knowing, all-seeing eye of the car which tailors everything to your specifications. "It will give you a color when you enter the car and it will set up your personal color preference," according to Warming.

We're not sure this will be a must-have feature, but if you care about having a car interior that matches your favorite color, the future looks good.

Yes, we can confirm that the wheels of the future will be... round.

Mini also wants to tap into its community more in the future. To that end, it's included an "Inspire Me" button. Press it and your car will take you somewhere other members of the Mini community have recommended, be it a coffee shop or an art museum.

It's an interesting concept, assuming you're told where you're going before the car takes off. It would be a nice way of finding new places and meeting new people if you're new to a city, for example.

It also ties into Mini's shared mobility angle. There's no reason you couldn't lend your car to other people in the city, and let it drive to them autonomously.