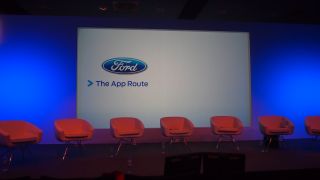 As Samsung put the final touches to its IFA launch event for the Galaxy Note 3, Galaxy Gear and Galaxy Mega Ultimate Extreme yesterday, Ford was busy talking about making KITT - the Knight Rider car - a reality.

Remember KITT? It could drive itself and respond to commands as though it was a real person. That's Ford's vision for the Focus and Fiesta of the future.

Pretty awesome, huh? Ford's open source AppLink platform enables developers to adapt their smartphone apps so that they can communicate wirelessly with Ford cars and interact with you using the power of voice recognition.

The upshot being you can talk to your car to request a band, album or playlist from Spotify. At IFA, Ford has announced new deals. A tie in with Hotels.com means you can ask your car to find nearby hotels, and one with AskWiki let you find any info you desire without taking your eyes off the road or hands off the wheel.

Likewise, TomTom app integration means you can request directions without the pain of having to pull over and tap in a post code or search for an address.

There are already over a million AppLink-enabled Ford cars on the road today - mostly in the US. But there's a problem, and it's a biggy: no industry standard means no rapid advancement.

At Ford's event today it wheeled out representatives from these partners and other companies to discuss the advancement of in-car technologies. What they have achieved already is impressive.

AppLink is open source so anyone can play with it, and Ford openly invites other auto manufacturers to get on board and integrate the system into their cars. In fact, it loves talking about how it wants AppLink to become an industry standard.

However, the critical problem is that so far, no one has taken them up on the offer. Not one other manufacturer has jumped on board. And that means every car manufacturer is still pulling in opposite directions, stifling development. So how long is it going to take before all new cars are offering these smart features? Well, probably a long time.

"There will always be part of the vehicle that will change at a slow automotive pace," says Jim Buczkowski, Director of Electrical and Electronics at Ford.

"I think what's most important is how we can help developers. We'd like to see AppLink go across other manufacturers just because it makes it easier for developers, so they can develop applications that work on many different automobile manufacturers' products.

"Is AppLink highly dependent on others for success? It's not absolutely dependent on them but eventually something's got to give. The developers will just not be able to bear the load of developing for everybody. So some standard has to emerge."

It's obvious that given the long life cycles of cars, the rapid penetration of this tech requires an industry standard so that all car makers can join up and push towards a new age of in-car tech.

But the problem is that the traditional speed at which the automotive industry moves - extremely slowly and with caution - is diametrically opposed to the fast nature of consumer tech. So while Ford champions open standards and pushes for more, when you look at the industry as a whole, very little progress has been made.