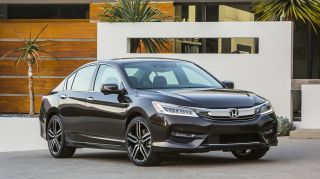 The adoption of both Google's Android Auto and Apple's CarPlay doesn't look to be slowing down with Honda announcing that the 2016 Accord will be the first Honda model to include both in-car systems.

The company showcased the new 2016 Accord model at its R&D facility in Mountain View, California, with the model available starting next month.

"The 2016 Accord will be the first Honda model and among the first high-volume cars in the marketplace to feature both Apple CarPlay and Android Auto," the car-maker also touted today.

Get ready for more

Honda also announced that it will be introducing other models compatible with Apple's and Google's in-car systems in the future.

"Customers want their vehicles to be more intelligently integrated with their smartphone-powered lives," said John Mendel, Honda's executive VP of the automobile division, adding that the company is committed to delivering the experience beyond the Accord.

Honda says the the new Accord will have a 7.7-inch high-resolution display can display audio settings, directions, incoming calls, parking sensor and camera alerts, SMS text messages when stopped, along with steering wheel-mounted controls.

Honda now joins a slew of car-makers to add CarPlay or Android Auto integration to their vehicles, including Buick, Volkswagen, BMW and Chevrolet.