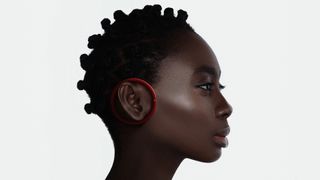 Frog, the company that designed the iconic Apple Macintosh have, and its conceptual Apple AirPod alternatives are certainly out there, with a radical design that leaves your ears totally exposed.

The open-hoop true wireless earbuds – which Frog have called Unum – are placed around your ears, so your ear canal is left completely uncovered, unlike traditional earbuds, which sit against your ear canal.

When you wear in-ear headphones, they create a seal against your ear canal, preventing environmental noise from ruining your music, as creating better noise isolation.

The future of true wireless?

Frog says that the conceptual wireless earbuds would use "advanced micro-drivers and acoustic design to precisely channel the sound into the ear", without completely blocking out the world around you.

Why is this necessary? Well, Frog envisions a future where voice assistants like Siri, Alexa, and Google Assistant are so ubiquitous, that "the constant connection to our personal headphones will be too isolating of a social experience".

As such, the company believes that we will need headphones that "support long augmented audio experiences without disrupting their real world communications".

It's an interesting concept, but it's hard to say whether people will adopt such a striking design for their in-ear headphones; that being said, the Apple AirPods were widely mocked for their long stems when they were released in 2016, and are now among the most popular true wireless earbuds ever.

Could the upcoming Apple AirPods 2 look anything like this? We'll have to wait until the imminent iPhone 11 launch at the very earliest to find out. With rumors of new AirPods as well as the first ever Apple over-ear headphones, and the Apple HomePod 2 on the cards, September could be a very interesting time for Apple's audio division.