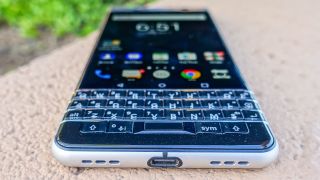 The BlackBerry Key2 is officially arriving tomorrow, June 7, but there’s no real need to wait until then to learn all about it, as a complete specs list has just leaked.

Of course, nothing on this list can be taken as confirmed, but it comes from Evan Blass, who has a very good track record with leaks, so there’s a good chance it’s accurate – and it points to a phone that’s significantly better than the BlackBerry KeyOne.

For one thing, the BlackBerry Key2 apparently has a dual-lens rear camera, comprising a 12MP f/1.8 lens and a 12MP f/2.6 one. That’s in place of just a single-lens camera on the KeyOne.

The cameras here can also apparently shoot 4K footage at 30 frames per second and have a dual-LED flash, while there’s an 8MP camera listed for the front.

Other spec highlights include a 4.5-inch 1080 x 1620 display with a pixel density of 434 pixels per inch, a physical backlit QWERTY keyboard with an integrated fingerprint scanner, a hefty 6GB of RAM (up from a maximum of 4GB on the KeyOne) and an octa-core Snapdragon 660 chipset (replacing the Snapdragon 625 in its predecessor).

We’ve seen plenty of leaked pictures of the BlackBerry Key2 as well, so at this point there doesn’t seem to be much we don’t know.