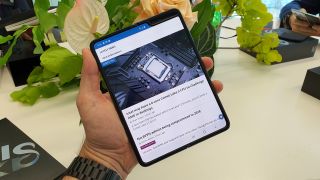 For some context, the original Galaxy Fold cost $1,980 / £1,900 / AU$2,999 upon release, so even accounting for slight pricing variation between regions, it looks likely the Samsung Galaxy Fold 2 could cost half the price of its predecessor.

Same price as the Galaxy S11?

The leaked Galaxy Fold 2 price would see it cost around the same as the Galaxy S10 did at launch, and it would make the foldable phone cheaper than Galaxy S10 5G which launched in South Korea in August 2019 for 1.39 million Won.

This price could cause some confusion, as we'd expect the upcoming Galaxy S11 to also carry a similar price tag - which would see the Galaxy Fold 2 potentially directly compete for sales.

With this in mind we'd take this latest report with a pinch of salt, as foldable technology is still expensive, and unless Samsung is planning to drastically reduce the feature set (such as reducing the camera capabilities, using a smaller screen or including a previous-gen chipset) on the Galaxy Fold 2, we'd be surprised if its price dipped this low.

If this report is accurate, it may mean disappointment for those who splashed out on the Galaxy Fold, as they could have bagged a more affordable device by waiting a few months.

Hopefully we'll find out more at MWC 2020 in February, where the Korean Herald posits the new foldable phone will be launched. TechRadar will be on the ground at the event, and we'll also be reporting on all the new rumors around the device, so stay tuned for all you need to know.