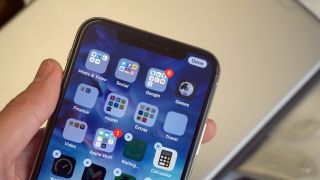 As impressive as the iPhone X is, its performance has certainly been under scrutiny since it launched, mostly for issues with its display.

And now there's a new issue to add to the list, as dozens of iPhone X users have reported that the front-facing earpiece speaker is making crackling or buzzing sounds when used at high volumes.

The reports, which are mostly on MacRumors and Reddit, vary a little in terms of what triggers the problem and at what volumes, but broadly it seems that any type of audio can cause the problem, with some users report it kicking in even at around 50% volume, so it doesn’t have to be super-loud.

It’s unclear how many users are affected, and given the likely millions of handsets in the wild it’s probably a very small number, but it's far from an isolated issue.

Nothing to hear here

We thoroughly tested the speakers on our iPhone X unit during our review period and found them to be powerful and punchy, with no hint of a crackle. We also re-ran the tests as a result of these claims over a variety of tracks and found no crackling ensued.

A similar issue was reported with the iPhone 8's front-facing speaker, but Apple issued a patch to solve this.

Apple did not immediately respond to a request for comment on a possible iPhone X speaker crackle, but we’ll update this article if we hear anything new and for now we’d suggest contacting Apple if you’re experiencing this issue.

With screen burn-in warnings and green lines on the display also reported by some iPhone X users it doesn’t sound like this is the worst of the potential problems, but hopefully a fix is on the way.