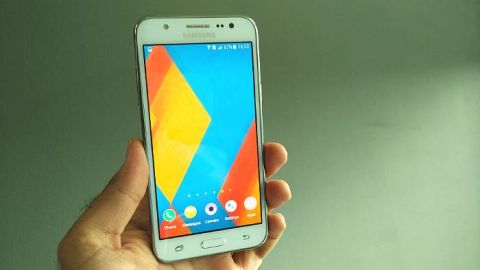 Samsung Galaxy J5 (2015) may not be the ultimate budget smartphone, but the value it offers at 12k is simply great.

Samsung turned heads with its premium Galaxy S6 Edge and Galaxy S6 Edge Plus. The flagships are distinctively designed, have amazing cameras and brilliant displays, but, come with a hefty price tag.

However, the South Korean tech giant was somewhat losing the game in the budget category as there were no potential contenders from the smartphone maker to fight the likes of Motorola, Xiaomi and Lenovo.

Knowing the fact that the sub-15k price category is one of the hottest in the Indian market, Samsung introduced two affordable smartphones under the new Galaxy J series in this price segment.

Priced at Rs 14,999 and Rs 11,999, respectively, the Galaxy J7 (2015) and J5 (2015) feature decent specifications and will compete with the myriad of Chinese and  domestic smartphones that comes at an affordable price.

We got the younger sibling - the Samsung Galaxy J5 - for review and this smartphone seems to be a value for money deal. So, let's dig deep and find out whether the smartphone is a threat to Xiaomi's and Moto G's reign or not.

The Galaxy J5 is built on the same design philosophy of Samsung's  earlier flagship devices such as the Galaxy S4, S3 and a number of Duos smartphones.

The old design is not very appealing, is kind of monotonous  but is quite practical. You can remove the rear panel to replace the  battery unit.

It also houses two SIM card slots and one microSD card  slot. The glossy plastic of the previous Galaxy devices has gone. The  matte finish rear not only prevents fingerprint smudges, but feels good in hands as well.

The chrome metal band runs around the edges and shines a lot, but  doesn't add a premium feel; something with a subtle touch would have  enhanced the overall design.

The band houses the volume rockers (placed  on left side), power on/off button (place on right side) and a  microphone, USB charging port and the 3.5mm headphone jack at the  bottom.

The buttons are rightly positioned and the compact size of the Galaxy J5 gives it a better grip. Your thumb can reach any part of the display, making it quite comfortable to operate the device even with one hand.

Samsung Galaxy J's closest rival is the 3 rd generation Moto G, which is definitely a better-looking smartphone and also features IPX7 rating that makes the device durable and conducive for rough-and-tough usage.

This is one of the best design selling points for Moto G which is missing on the Samsung Galaxy J5 (2015).

Considering the price tag, a display with HD resolution (1280 x 720) would have been a standard thing if we were in 2014. But in 2015, full-HD is the norm and Samsung has failed to offer the bare minimum.

The South Korean company has equipped the Samsung Galaxy J5 with Super AMOLED display that delivers vivid and saturated colors than the phones available in this price bracket.

The Galaxy J5 poses no major issues on the viewing angles front, largely thanks to the use of AMOLED panels which delivers a soothing multimedia experience essential for users with taste for watching movies and playing games on their devices.

It does not feel dull and washed out like the LCD panel on the Moto G 3rd generation. The sunlight legibility is also decent as the display has adequate brightness to make content easily visible even in direct sunlight.

The internal 8GB storage feels a bit limited. However, microSD cards of up to 128GB can be used to further boost the storage capacity that solves the memory issues.

In terms of connectivity, the Galaxy J5 (2015) offers two SIM card slots that support 4G LTE and beyond that we're talking about conventional connectivity features like Bluetooth, Wi-Fi and GPS  available on the device.

Samsung Galaxy J5 utilizes the TouchWiz UI based over Android 5.1.1 Lollipop on the  software side of things. Unlike the previous versions of TouchWiz prior to Android 5.0 Lollipop, the one on the Galaxy J5 and some recently-launched Samsung smartphones feels a lot refined and fluidic in terms of design and usability.

We did not come across major responsive issues with the interface. On the whole, we were satisfied with the way things seem to have improved with the software.

Long pressing home button opens up the Google Now and double press leads  to the camera app instead of Samsung's S Voice, which is good as the  voice assistant is sparely used by anyone.

Samsung has also added 'Smart  Manager,' which is basically a tool to check the performance statistics  of the device. You can check battery status, storage space, memory used  by the apps, etc. And it also allows you to close the apps in the background, delete unused files and run antivirus checks.

Considering the fact that Chinese as well as domestic players are investing a lot on customization features, Samsung has also made its theme engine quite powerful.

All in all, we found that the software on  the Galaxy J5 is snappy, feels much improved and doesn't make the smartphone feel sluggish.

The combination of Snapdragon 410 chipset and 2GB RAM is decent for a mid-level performance. You can easily churn out a good level of multitasking with ability to run all the applications in the Play Store.

We did not encounter any major issues with the performance of the smartphone in day-to-day usage.

We also ran our usual set of benchmarks and you can check the  performance in the below graph.