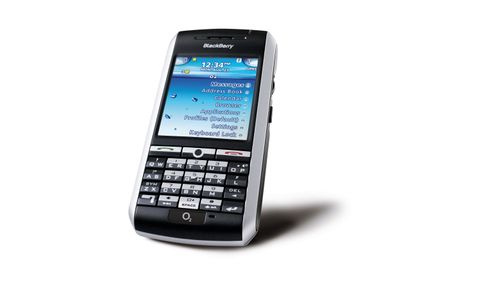 Once you get used to the keyboard, this is possibly the best BlackBerry so far!

After setting the agenda for mobile messaging devices, BlackBerry maker RIM is looking to hammer home its dominance in the mobile email market with yet another keyboard-toting device.

Even a quick look at the 7130g shows that it's a different beast to the 8700g we reviewed back in issue 141. It's the latest instalment in the 7100 series, and therefore boasts a slimmer body shape to the more business-like 8700 devices.

It's certainly better looking than the other branch of the BlackBerry family, and in terms of size it's a little bit like the Sony Ericsson P910i just without the fl ip-down keyboard or touchscreen display.

As such, it's a far more consumer-orientated product, and is the kind of device that you can use all day for work and then take down the pub with you of an evening, so you won't need to splash out on a second phone. Still, this device is all about email and, as you'll see, there's a lot of other business features crammed into this compact contender.

We'll start with the main course - push email. The email service from RIM comes in two fl avours: the Enterprise Activation method for big business users, and an internet-based solution for individuals or smaller businesses. We'll be concentrating on the latter, and leave it to your IT department to sort you out if you're using the former.

If you're not getting your BlackBerry as part of a business package, or your business is too small to warrant the Enterprise Activation approach, then you'll be pleased to know that the internet version works very well. Our sample was from O2, and the network has set up a configuration website to ease you into the BlackBerry world.

However, setting it up is not quite as easy as some people would have you believe. It's not just a case of typing in your email address and you're away, although once you've figured out what you're up to in this site, simply entering your email address (rather than having to dig out your mail server details) should let you start receiving emails pretty much straight away.

You can also set the 7130g to send emails from your main account, not just the O2 mail one you get as standard when you start. Any incoming messages you receive on any of these accounts are then 'pushed' to your device via GPRS, and a little envelope appears on the screen letting you know new mail has arrived.

More usefully, the flashing green indicator at the top of the device turns red, so you don't even need to get it out of its case to check if you have new mail.

Once mail does arrive, you get to check out one of the other highlights of this device - the screen. It's a 240x260 pixels number with 65,000-colour resolution and it looks great, with the text from messages a doddle to decipher.

Any attachment you receive can be read on the device, and the screen is ideal for this use; JPEGs are shown clearly, and it's more than capable of displaying any website links that you get sent. You can also attach your own fi les to emails.

It makes the most of the colourful icon-driving menu system, although to be honest we preferred the more compact list display, which made it easier to get to basic options such as messaging and keyboard lock while hiding the less-used options out of the way. It is, of course, a matter of personal preference.

Below the screen sits the famous BlackBerry keyboard - or one of them anyway. The keyboard is the major difference between the 7130g and most other current BlackBerry devices.

Like the earlier 7100-series devices, the 7130g has lost the full Qwerty keypad, and instead uses a more compact system which adopts the Qwerty layout but, as a general rule, has two letters on each key. This looks confusing at fi rst, and does take a bit of getting used to.

The 7130g uses RIM's own SureType predictive text system, and it proves itself to be reliable and intuitive. However, having a keypad that's a cross between Qwerty and standard text messaging takes a degree of mental adjustment for a seasoned texter.

Oddly, even though this BlackBerry is aimed at getting more consumers - as opposed to business users - onboard, there's one major feature missing: a camera. While this is forgivable in business-orientated devices, it's a noticeable omission here - especially as many people would love to be able to add photos to emails as attachments and send them that way.

Obviously, with security issues paramount for corporate customers RIM has decided to play it safe by leaving it out, but we're still hoping to see a camera-sporting consumer BlackBerry one day soon.

Still, there are some excellent applications on here, including the very useful eOffi ce which offers word-processing and spreadsheet functionality. Plus there are all the expected contact and diary tools and password managers.

There are some other fun apps on board as well, including the wonderful Google Maps which provides you with mapping down to amazing levels - including major street level in the UK! There's also two games, and these include an excellent poker game that will get you hooked if you let it.

Once up and running, the push email service is seamless. Whether we were in the UK or abroad, emails arrived with an unstoppable regularity. The only thing slowing it down was our initial attempt to type using the unfamiliar keypad, but during the review period our skills improved dramatically - it's simply a matter of practice.

Apart from that the usability quotient is very high, with that attractive icon-driven menu system - or list based if you prefer - allowing you to navigate around smoothly using a combination of the side-mounted scroll wheel and the 'back' button that sits below it.

Call quality was not quite as good as some competitive smartphones, and the sound of the voice at the other end can sound slightly tinny when compared to the very best mobile devices out there.

However, reception appeared to be good and the people we were talking to said we sounded OK. Battery life also proved to be rugged, with a good four days worth of emailing and calling without the need for topping up the battery suiting us just fi ne.

Once you get used to the keyboard, this is possibly the best BlackBerry so far. It offers people who don't want to carry a PDA-sized device with them the chance to get in on the push email phenomenon. The fact it's considerably better than previous 7100 series devices means that the BlackBerry train will keep on rolling!

Jog wheel: The jog wheel is an intuitive and easy-to-use method of navigating through menus and files

Large screen: The large and bright screen allows you to read those all-important emails without squinting

Qwerty keyboard: The Qwerty layout has been modified, but decent-sized buttons give the 7130g that trademark usability

Mute button: This handy button enables you to turn the phone to Mute mode with a single touch