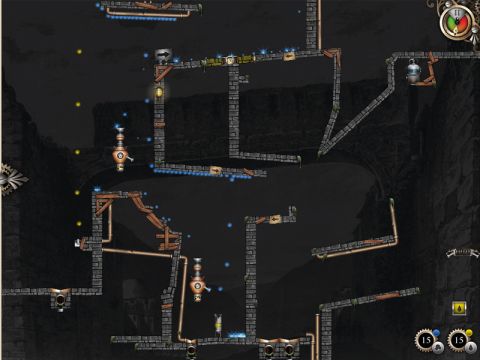 Are you a master of alchemy or just someone who's good at cleaning up?

Alchemy's a fickle thing. Adding stuff together to make other stuff is generally a doddle.

A bit of oxygen here, a dash of hydrogen there… water. Chuck some copper and zinc together and you have brass. Combine cocoa, flour, butter, eggs and sugar, and a chocolate brownie appears. Turning base metals into gold, though? Not so simple.

Despite all the pseudomystical, alchemical goings-on in the game's back-story, This is, at heart, a physics puzzler, which features the manipulation of solids, liquids and gases.

The idea is to funnel the elements to their relevant receptacles, transforming them into various states, according to their properties. For example, you might start with a green liquid, so you use wood to create a platform that guides it along.

Next you use an evaporating device to turn it into a gas, then a condenser collects the gas, turns it back into a liquid and deposits it at the collection point.

However, things get complicated when more than one type of matter is introduced and the tools at your disposal get more complex too.

It's clever stuff and what seems like a rather repetitive activity during the first few levels soon evolves into a highly rewarding puzzle-solving experience.