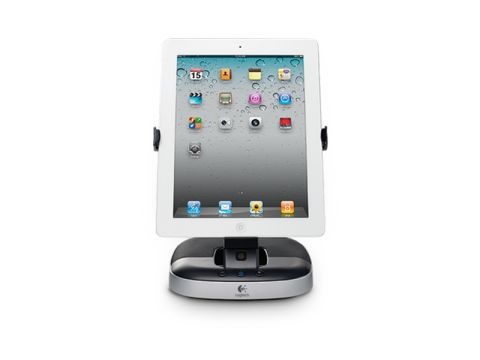 Logitech's iPad stand is a great speaker dock for the price

A really good iPad stand for the price – you'll need to spend twice as much to do better.

Speaker docks for Apple's iPad aren't quite as prevalent as those for the iPhone and iPod, in no small part due the size of unit needed to hold the larger tablet device.

Increasingly, though, the big names are starting to offer solutions. Altec Lansing, Philips, JBL and others have got in on the act, and so has Logitech. In fact, Logitech has really jumped aboard the iPad bandwagon, offering accessories such as the excellent Tablet Keyboard for iPad.

This speaker dock doesn't really bother with fancy features – it's not battery powered, and there's no AirPlay or other wireless audio – but just focuses on holding your iPad sturdily, charging it and playing music.

The base is quite large, but we've no complaints about that. It means the whole unit is stable, and offers lots of space for speaker drivers. On the front is of the base are the controls: the on/off button and volume buttons.

The arm that holds the iPad is quite stiff to move, but again we don't see this is a downside, since it means your iPad won't be falling flat any time you press it. There's very little wobble from the unit when you're tapping the iPad, which you get in some stands.

There are small plastic sleeves to accommodate the slimmer profile of the iPad 2, but iPad 1 owners can just remove than to fit the older device in.

The arm rotates 90 degrees so you can use the iPad in landscape mode, and it clicks into place once fully rotated. This is the only part of the unit that has a little give – the there's some shifting once it's in the landscape position, but not a huge amount.

The last question is the sound quality. Put simply, it's sufficient. This isn't really a party machine; it's more of a desk companion. There's noticeable bass and decent clarity at the high end, and the middle is really quite good, with lots of detail. It can go quite loud, but the louder you go, the less definition there is in the bass and treble, and it becomes generally more shrill, so it's designed more for background music.

That said, it handles speech very well even up to quite loud volumes, so it's ideal for watching iPlayer or 4oD.

Overall, the Altec Lansing Octiv 450 is probably a slightly better unit, with marginally improved sounds compared to the Logitech Speaker Stand, but it costs around twice as much. For an RRP of £50, and available online at around £40, this is an excellent choice for an iPad stand when it comes to value for money.