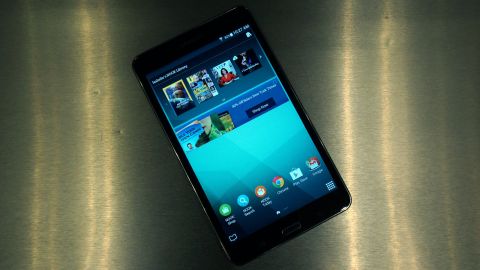 Samsung and Barnes & Noble's joint tablet effort sees Samsung take the wheel in almost every regard to great effect, but that only makes us miss the Nook look and feel.

[Editor's Note: We've corrected our reportage of an error within Barnes & Noble's press materials for the device and removed the relevant detracting "con".]

Don't count Barnes & Noble out of the tablet game just yet. The company has enlisted one of the biggest players, Samsung, to keep it in the ring with Amazon. However, Samsung is clearly taking center stage here, from the hardware to its name: the Samsung Galaxy Tab 4 Nook.

In almost all regards, this looks like a Samsung effort, with Nook along for the ride. Even the iconic Nook software is relegated to select apps and widgets (and some firmware changes) on top of what's otherwise stock Android 4.4 KitKat, with some Samsung TouchWiz – err – touches.

Frankly, being a fan of previous Nook tablets (I still use a first-generation Nook e-reader), it's a bummer to see the Nook identity relegated to some apps on another company's tablet. Don't mistake, this was a smart move for B&N, financially speaking, to remain in the ring with Amazon. But was it smart as far as outward perception goes? I'm not so sure.

Outwardly, there are zero differences between this 7-inch tablet and the existing Galaxy Tab 4. Available in an almost shale-like black and pearly white, the slate hits all of Samsung's recent design cues.

Curved edges adorned in chrome, an all-glass face, a firm home button beset by capacitive menu and back buttons, and a faux-leather rear casing – the gang's all here. Also, B&N CEO Michael Huseby was keen to point out at a launch event in New York City that this is the first Nook to sport two cameras.

With a 1.2MP lens up front and a 3MP shooter around back, don't expect amazing photos or video from either direction. Regardless, it's a welcome addition that wasn't there before, so there's that.

Otherwise, the device offers a premium, tactile feel. The textured back will come in handy on the subway or tube when you're forced to read one-handed. All around, the Tab 4 Nook is a tablet I wouldn't mind being seen holding, especially for $179 (about £107, AU$192).

For that price, you get a pretty sharp 7-inch, 1280 x 800 (216 ppi) TFT touchscreen, with a quad-core, 1.2GHz Marvell processor and 1.5GB of RAM running the show. The Tab 4 Nook packs a paltry 8GB of storage, expandable by up to 32GB via microSD. However, all Nook Shop purchases are stored remotely in B&N's Nook Cloud service.

Finally, the tablet offers 802.11 a/b/g/n Wi-Fi and Bluetooth. This is all powered by a 4,000mAh battery that B&N claims can hang on for up to 10 hours of constant video playback.

Not a bad deal, but here's B&N's biggest problem: if I were reading on one in the subway, exactly no one would approach and ask, "Is that the Samsung Galaxy Tab 4 Nook?" With absolutely zero Nook branding on the thing, they'd assume that it's a Samsung gadget and go on their merry way.

At least Nook gets a cranny

Now, say that the passerby was looking over your shoulder on the subway. Well, that would be rude, but at least they might notice that this tablet isn't just Samsung's.

B&N's Nook software team worked with Samsung at the firmware level to give the user interface at least Nook-like experience. First, this is achieved through three Nook apps: Nook Search, Nook Shop and Nook Today. (Plus, Nook Reader is baked into the firmware, it seems.)

Nook Search allows you to look up any piece of content either stored in your Nook Cloud or available on the Nook Shop. Speaking of which, Nook Shop is essentially what Nook fans are used to for buying all sorts of reading content, games and apps. Lastly, Nook Today offers up the latest B&N bookseller recommendations and previews of the latest periodicals.

The custom Nook widgets on the Tab 4 Nook home screen simply collect all reading content on your device or in Nook Cloud and offer up current deals in the Nook Shop. Both widgets make the interface feel a bit more specialized, but aren't exactly major.

More interesting is what B&N managed to squeeze in at the firmware level. For instance, the capacitive menu button on the slate causes a horizontal menu of open apps and books to appear, rather than a vertical one on most other Android tablets. A B&N representative tells me that this was implemented for easier searching across numerous titles.

That tiny book icon on the bottom left corner of the home screen turns out to be far more useful. Tapping that little open book launches the most recent piece of content you were reading, remembering your place, too.

Aside from these interface changes and baked-in apps, the Samsung Galaxy Tab 4 Nook is clearly Nook living inside a Samsung device. When B&N first announced Samsung as its new hardware partner, my hope was for something more like a "Nook by Samsung" or even "Samsung Nook" in both name and appearance.

Unfortunately, this is a terribly safe move, with B&N leaning heavily on the Samsung brand to push units rather than the tech giant providing the plastic and silicon bits. The result is a fine budget tablet, probably one of the better ones, but one that sorely lacks the Nook identity established over the past four years. (A design ID I dug a lot, mind you.)

Doug Carlson, B&N EVP of Digital Content and Marketing, tells me that we can expect to see even deeper Nook integration in Samsung's future Nook tablets. That's great to hear, but what I want is a device that still looks and feels like a Nook – not something that simply operates like one, and barely so at that.