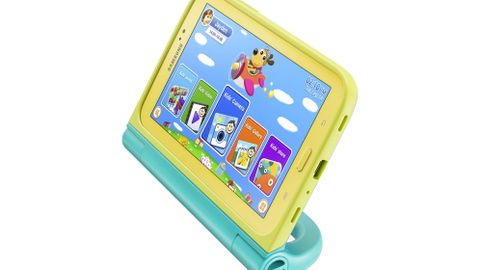 The Samsung Galaxy Tab 3 Kids features the same hardware spec as the Galaxy Tab 3, so your kid will be spoilt with access to twin cameras, then mildly disappointed by the blotchiness and general gloom of the output.

Images come off the camera at a maximum 2048 x 1536 resolution, and they're pretty depressing to behold. Colour reproduction is so poor images look like they've been run through some sort of 1990s-colour-printer-with-low-toner filter, plus the lack of flash makes indoor photography unappealing.

What's also sad to see is that there's no integration of images within apps. The third-party drawing app Samsung's stuck on here isn't aware enough to pull photos in from the Android gallery, which disappointed my child who's used to other Android drawing tools that let you import shots and draw exotic beards on everyone's faces.

Video captured in Kids Mode is saved at a shockingly poor 640 x 480 resolution. Seeing as kids will probably end up taking videos of their feet and the dog's nose that's probably not such a problem, and at least the framerate is consistent and smooth.

There is the luxury of a front-facing camera, though, plus Samsung's added in a range of clever overlays to the simplified Kids Mode camera interface, which let you add dog ears, funny noses and the like to images. This made my kid laugh quite a bit, but then he's only three so is still quite easily impressed by the magic of today's technology.

Heading over to the usual Android OS brings in loads more camera options via Samsung's TouchWiz customisations, where users can add a few filters, adjust the brightness and upgrade the resolution of clips to 1280 x 720, meaning the 640 x 480 limit on Kids Mode has presumably been put there to stop kids from eating up all the system storage with their videos.

And again, Kids Mode is the best thing about the experience. The simpler camera app is easy to use, with chunky, bright icons letting my kid immediately identify what each button does.

The rear camera sensor is fairly near the right-hand side of the tablet, though, so most of the videos and photos my child took featured quite a bit of finger blocking the shots.

If you choose to let your child have full access to the Android range of media options, there's plenty to do on the Galaxy Tab 3 Kids. The YouTube app works well enough given the limitations of the low-resolution display and relatively weedy 1.2GHz dual-core chipset, plus Google's Play Music app is on here for cloud-based music playback.

In terms of actual child-friendly media options, there's a standalone player called Kids' Video in the Kids Mode area. Rather cleverly, this filters out any videos recorded back on the standard Android side of things, so the only clips you see in the Kids mode gallery are the ones recorded in Kids Mode.

What happens in Kids Mode stays in Kids Mode, unless you access the PIN-locked parental options and manually check the tickbox beside the standard Android gallery, in which case all videos on the device pop up.

That's quite handy, as my child loves looking at photos and videos of himself, so if you have a load taken in the normal Android camera, your child can access them if you allow him to.

The only problem with doing that is it means your child can then delete all the videos on the device too, so be warned that your precious memories might be coldly binned by an accidental exploring finger.

Another area where Kids Mode shows welcome signs of restriction is with sharing media. You can't, basically, with the Android share menu completely missing from the images in the photo gallery. It's quite nice to know your children won't be sharing photos.