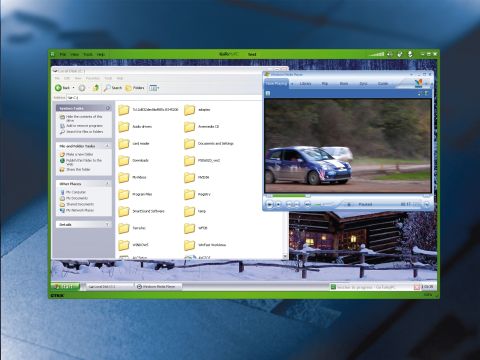 GoToMyPC allows you full access to your PC away from home

Lots of intelligently implemented features make this a great buy

As a result of the steady increase in broadband internet speeds, remote control of a Windows PC is becoming an ever more viable way to bring all your files and applications - which are ordinarily scattered across several machines - together into one constantly accessible whole.

Initially remote desktop programs, such as the Remote Assistance software bundled with NetMeeting and MSN Messenger, were simply a way of wresting sluggish control from an ailing friend and sorting out their PC-related problems.

Nowadays, with programs and services like GoToMyPC 6 coupled to a suitably potent net connection, it's realistic to expect an experience close to that of sitting in front of the machine itself, with the computer's OS appearing as a window on your desktop that responds to local mouse and keyboard inputs.

What's more, with a PDA, particularly one with a 640 x 480 screen, you needn't even lug a laptop around to be genuinely productive from afar.

Rather than a simple software pair with one program acting as a server and the other as a client, GoToMyPC 6 is a service, with an appropriate pricing model.

While you still need a program lying dormant on your system, ready to leap into life when you assume control, the client side is handled using Java-based browser plug-ins. It's an elegant way of managing the concept, meaning that wherever you are, the miniscule 4MB client-side program is always available.

While you might assume that a browser-based solution might be in some way limiting, GoToMyPC's client is remarkably sophisticated. Both sound and video streaming are supported and with reasonable internet connection (2Mbit/s or above) the results are impressive.

If you're lumbered with a less than brisk data line, there are welcome tweaks, such as dropping the colour depth to 256 and lowering the quality of the sound, which ensure that GoToMyPC remains for the most part entirely smooth.

Most spectacular, though, is the PocketPC version of the software, which works at a speed and detail (full True Colour) that utterly belies the ARM processor sitting at the core of the PDA itself.

In fact, GoToMyPC 6 includes many similarly thoughtful features. One obvious example is the ability to save time by dragging and dropping files from the remote PC to the client and vice versa to initiate file transfer.

An extremely useful shared clipboard really makes it viable to work simultaneously between computers. No longer will you have to worry about several versions of the same document floating around on various machines; the original can be edited and cited with ease.

There's one snag in this fairytale story, though, and that's the fact that GoToMyPC remains a subscription service. With very little digging, you'll find that there are remote access programs available free that feature the vast majority of GoToMyPC's core functionalities, including, in some cases, remote Java-based access.

There's no doubt that GoToMyPC is a more smooth and straightforward way of connecting to a remote PC than the free suites, and that the added features such as sound and video support are useful if you can't take your media collection away with you.

Is that really worth over £100 per year, though, or £160 for access to two PCs? For the casual user, we would argue that suffering a drop in performance is the less painful of the two options.

We're extremely impressed by GoToMyPC 6. It's packed with intelligently implemented features and provides a rock solid and fast connection that's not too far removed from accessing your PC from the same room. What's more, the support for Pocket PCs is ridiculously impressive, performing a fine impression of squeezing a desktop computer into your pocket.

Unfortunately, unless you're someone who is away for exactly 50 per cent of your time, there seems little sense in paying so much for a VNC service. Any more travelling and you would have all your important data on a laptop with you, any less and one has to wonder just how much use GoToMyPC would get, and whether it would be worth paying for this professional application over a less efficient but free alternative.