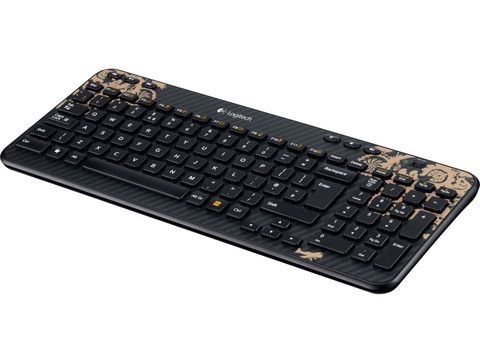 Simple, but effective design, in a range of colours

Small, light and comfortable to use, with a great battery life and handy features

The Logitech Wireless Keyboard K360 is a pretty standard wireless PC keyboard, but it has a few nice features and design choices that make it worth considering if you're on the lookout for a new keyboard.

To begin with, the K360 is pretty small – around three quarters of the size of a usual keyboard. This reduction frees up a lot of space on the desk, and makes it easier to carry around.

We've often found that typing for long periods on a laptop – or even worse, a netbook – can be quite uncomfortable. So having a larger keyboard to use on them, that is still small and light enough to fit into a laptop bag is a real bonus.

Smaller keyboards can often lead to more discomfort and, unlike a lot of recent Logitech keyboards, the K360 is not ergonomically designed. However, we found that when using it, the Logitech Wireless Keyboard K360 felt very comfortable – a lot of this being down to the ample spacing between the keys.

The small size also allows for an excellent battery life of around three years.

As well as six media-centric keys (back, forward, play/pause, mute, volume down and volume up) there are 12 programmable F keys for linking to much-used applications such as internet browsers and email. These can be easily programmed via Logitech's user-friendly software.

Another nice bonus is that if you have a number of other wireless Logitech devices, such as the Logitech Anywhere Mouse MX, then you can connect them all up to a single USB dongle, freeing up your computer's USB ports.