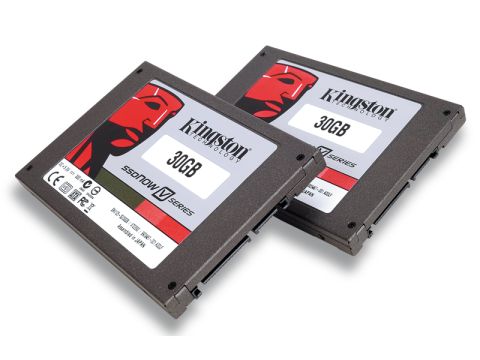 The RAID option is interesting, but a larger single drive makes more sense

Many things would make our computing lives simpler. A Euromillions lottery win, for instance, wouldn't exactly hurt. Even a little one that we had to share with a syndicate of bakers from Turin and a nice old lady from County Tipperary. At the very least, we could pull the trigger on an array of pointlessly pricey solid state drives without caring whether their snappy performance would last longer than a week.

Back in the real world, where such trivialities as money actually matter, SSD performance doubts present a real conundrum. Thanks, therefore, goes to Kingston for making things even more complicated with the latest addition to its SSDNow V Series of affordable SSDs.

At 30GB in size, the new SNV125-S2 is cutting things fine in terms of capacity. It's probably intolerably small, even as a boot and application drive.

Thanks to the unusually low price for an SSD, however, it offers the tantalising prospect of tag teaming a pair for 55GB's (formatted) worth of mahoosive RAID-powered, solid-state performance. Just think, SSDs in RAID 0 for under £150. Sexy.

But we mustn't allow sordid images of of SSD-on-SSD action to distract us from the serious task at hand.

Crucial to any SSD is its controller. In this case it's the same Toshiba T6UG1XBG item we sampled an issue or two ago in Kingston's 128GB V+ Series drive. It's a controller chosen as much for cost as performance, but it does support the Windows 7 TRIM command. And that means performance shouldn't fall off dramatically over time.

All of this begs the question of how it performs out of the box. Kingston claims peak read and write performance of 180MB/s and 50MB/s. That compares well with Intel's 40GB value drive, the X25-V, which is rated at 175MB/s and 35MB/s respectively. What's more, the Intel drive costs an extra £30.

Our testing reveals this 30GB'er clocks in just over 190MB/s for sequential reads and around 55MB/s for writes. Less impressive is random write performance – in low single-digit territory in terms of MB/s. Intel's value drive typically manages over 20MB/s for random writes.

However, arguably the more intriguing comparison is between a pair of these cheap 30GB drives in a RAID 0 array, and a larger, more performance orientated single drive. Like Intel's X25-M G2 80GB drive, perhaps, yours for around £190. If peak performance is what you care about, you'll need the RAID solution.

A pair of SNV125-S2s will spew out data at a scarcely believable 383MB/s – much faster than an X25-M. Write performance is admittedly more modest at 113MB/s, but it's still quicker than the Intel drive. The snag once again, though, is random performance, which is well behind what a single Intel drive can achieve.

How big an impact this has in the real world is hard to quantify. In our game level-load benchmark it's a dead heat, while the RAIDed Kingstons are a couple of clicks quicker in file decompression.

It's worth noting the only disk controllers that support TRIM for SSDs in RAID can be found on Intel X58, P55, H55 and H57 boards.